Following concerns some drivers were jumping the red lights at Crowborough Cross putting other road users at risk, the County Council’s Road Safety Team have reviewed the situation and is now considering what can be done. 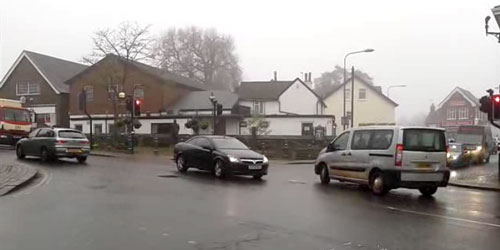 Last year Highways Officers changed the timing of the lights.  The ‘all red’ period was increased to allow traffic waiting to turn right in the middle of the junction more time to complete their manoeuvre before the lights changed to green for the other direction.

Following the changes there were two collisions at Crowborough Cross – one in December and the other in January.  Residents and Councillors were worried the re-phased lights had actually made matters worse, as impatient drivers frustrated by the longer wait were jumping the red lights.  They called upon the Highways Authority to urgently re-assess the situation.

In January Crowborough Town Council were told a report has been commissioned and site visits undertaken.

Earlier this year, our contractor compiled a report with various options for improving the operation of traffic lights at this junction.

We have asked the contractor to provide us with detailed designs and costings for some of these options, which will then be passed to our road safety team for their consideration.

The proposals could include changes to the phasing of the lights and changes to road markings and signage.  Any changes would look at not just at improving road safety but also improving traffic flow at what is a very busy junction on a major cross-county route.

We do have limited resources so for any changes to go ahead we’d need to be able to show that they were of a sufficiently high priority when compared to other potential schemes in the county.

We would hope to have a final decision on what changes, if any, will be made to the junction, later this year.

If you want to get in touch with your two County Councillors on this issue, click here for their contact details.