A woman who admitted preying on elderly and vulnerable people she befriended while working in hospital and as a carer in the community has been jailed for two years. 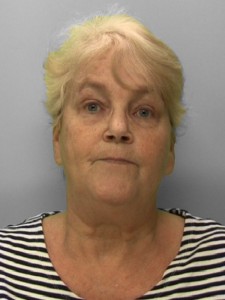 Gwendolyn Lanius stole thousands of pounds from the vulnerable in East Sussex after tricking them into thinking she was there to help them.

But she was found out after a pensioner had CCTV cameras installed in her home that caught Lanius in the act of stealing from her.

A detective then pieced together her movements over a number of years that pointed to the 61-year-old as being responsible for a series of thefts.

The key moment came in August 2014 when the 83-year-old woman who Lanius had been doing cleaning and chores for in Uckfield reported that money was being stolen from her home.

A friend of the victim organised for CCTV cameras to be fitted in her home and they recorded Lanius entering the home when the victim was out and stealing money.

The CCTV, which can be viewed below, showed Lanius entering the home while the victim was out, searching cupboards and drawers and even the pensioner’s bed to find any money that had been hidden:

She then left with the cash she found, taking the key to the house with her.

Lanius had stolen more than £600 from the home over several months.

When officers looked into the background of Lanius they found a series of suspicious thefts from patients while she was working as a healthcare assistant at Uckfield Hospital and Eastbourne District General Hospital.

After speaking to victims and their families, Detective Constable Annie Nash was able to link the crimes to times when Lanius had been visiting the wards.

In each case she had befriended the victims so as to gain their trust before targeting them.

She also befriended elderly and vulnerable people in the community and would offer to help them with chores and housework.

Between April and August 2009 Lanius began working for a family who owned and lived on a farm near Uckfield. She did household chores and helped with the care of a terminally ill woman.

After the woman died it was discovered that more than £3,500 was missing from the family’s safe.

Lanius also preyed upon a 69-year-old man from Uckfield who she began visiting in the summer of 2013. He became suspicious that money was going missing from his wallet when Lanius visited. Sadly the victim died two weeks before the thief admitted stealing £80 from him.

Lanius initially denied all the offences when interviewed by DC Nash, from Sussex Police’s priority crime unit, who worked tirelessly in investigating these incidents often with people who had also had to suffer bereavements of their loved ones.

But Lanius, of Regency Close, Uckfield, pleaded guilty to one count of burglary, five counts of theft and one attempt theft when she appeared at Hove Crown Court on 14th May.

She appeared at court on Thursday 18th June for sentence.

Lanius deliberately targeted the elderly and vulnerable by preying on them in their time of need.

She stole from the terminally ill and their families while they were having to cope with devastating illnesses as well as elderly people who had placed their trust in her.

Her jailing reflects the sickening aspect of her crimes and the impact it has had on her victims.

I hope her sentence will allow her to reflect on her actions but unfortunately she has shown no remorse throughout this case.