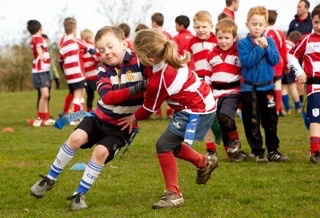 Mini Rugby is a game for girls and boys between the ages of seven and twelve. The game is developed progressively from very small sided games (3 or 4 per team) on small pitches at the age of under seven where the emphasis is on running, evasion and passing.  By the time they reach the age of twelve, larger sided games (12 or 13 per team) are played on larger sized pitches.  The age bands progressively introduce concepts and skills such as tackling, scrummaging and tactical awareness.  The emphasis is on developing the core values of rugby of teamwork, respect, enjoyment, discipline and sportsmanship.

Mini Rugby is available at 22 clubs in Sussex and is played on Sunday mornings throughout the season from September to May.  The Sussex RFU website has the addresses and contact details of clubs offering mini rugby.

Mini Rugby Festivals are held at various clubs throughout the season; however the Sussex County Mini Festival is somewhat different in that all clubs in Sussex are invited to participate.  It is the largest mini rugby event in Sussex with the involvement of some 2000 children.  This year the Regional events were held on 15th March  at Chichester, Haywards Heath, Eastbourne and Hastings.  The top two teams at each age grade at these Regional events have been invited to the finals on Sunday 12th April in Crowborough.

Crowborough Rugby Football Club are well represented with its U8s, U9s and U10s playing in the finals.

Kick off is at 10am on Sunday at the Rugby Club on Green Lane.