Wealden District’s Police Commander is asking for feedback about how stop and search powers are being used by his officers. 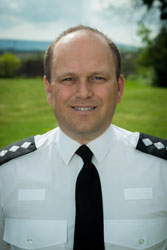 Sussex Police have joined a new Home Office initiative which aims to achieve greater transparency and community involvement in the use of stop and search and support a more intelligence-led approach.

Sussex Police have published a range of data, showing the day & time searches were carried-out, the age and ethnic origin of the people stop-searched and which officers are using the powers most.

In addition to arrests, the stats also show ‘other positive outcomes’ (+ve). That is where an arrest wasn’t made, but the person was cautioned or there was a community resolution, fixed penalty notice, seizure of alcohol or cigarettes, cannabis street warning or summons. 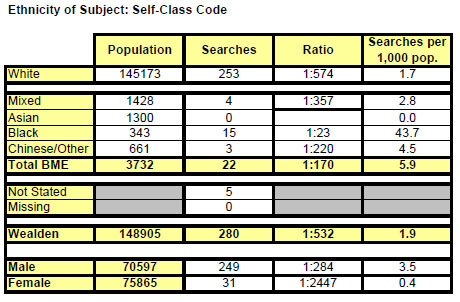 Number of Searches by Ethnicity and Age (May to Oct 2014)

The data shows black and ethnic minority groups are searched much more frequently than white people.  If you are black, you are 25 times more likely to be stopped and searched in Wealden than a white person.

The statistics also show ten police officers in the district are responsible for carrying-out nearly half (48%) of all searches.

Are you interested in giving feedback on how stop & search powers are used in Wealden? Please email district.wealden@sussex.pnn.police.uk

At the time the Home Office launched the new “Best Use of Stop and Search” scheme, Teresa May said:

Nobody wins when stop and search is misapplied. It is a waste of police time. It is unfair, especially to young black men. It is bad for public confidence in the police.

The proposals I have outlined today amount to a comprehensive package of reform. I believe that they should contribute to a significant reduction in the overall use of stop and search, better and more intelligence-led stop and search and improved stop-to-arrest ratios.

But I want to make myself absolutely clear: if the numbers do not come down, if stop and search does not become more targeted, if those stop-to-arrest ratios do not improve considerably, the government will return with primary legislation to make these things happen.

By taking part in the scheme, Sussex Police say they are making a commitment to:

Police officers have the power to stop and search people under a range of legislation, including Section 1 of the Police and Criminal Evidence Act 1984 (PACE).  This allows an officer who has reasonable grounds to suspect someone who might be breaking the law to stop and search them or their vehicle to look for stolen or prohibited items.

All the charts & statistical data for Wealden can be downloaded here: Stop & Search Data for Sussex Police – Wealden District.

Crime
One comment on “How Stop & Search powers are used”