Crowborough Flower Club have had another successful year at RHS Chelsea Flower Show.

Having been awarded a Silver Medal at the centenary RHS Chelsea Flower Show in 2013, Crowborough Flower Club was invited to compete again at this year’s show.

The two winning club members from last year, Ruth Collingridge and Jennie Thomas, happily accepted the challenge again.  They were given the overall title of “Pageant”, and decided on a medieval theme using the subtitle “A Lady’s Favour” to describe their design.

Their floral display won another a Silver Medal for Crowborough in the Best Floral Arrangement Exhibit.

It has been a wonderful experience to represent our Flower Club at the greatest flower show in the world.

Ruth and Jennie described how the design was created:

The concept of a medieval pageant suggested scenes of “In days of old” where ladies would give their personal favour to a chosen knight before the jousting.

In this manner the design began to grow as a display of two shields, representing the knights, and a jousting lance carrying the “lady’s favour” of a rose at its tip.  All of this was depicted using plant material.  During a trip to the flower wholesalers a crown, also of floral material, was discovered and was added to the display, to give a royal slant to the whole scene.  The exotic mix of flowers chosen was of rich vibrant colours of purple, gold, red and cerise pink, with green foliage and background drapes of purple and gold material to enhance the display.

Ruth and Jennie would like to thank supporting club members who held a “Bring & Buy” coffee morning to help generate the necessary funds for the display, and thank Millbrook Garden Centre for contributed generously to the fund.

A video of the Silver Medal winning design from last year can be seen be seen below:

Members of the Crowborough Flower Club are now putting all their energies into creating a wonderful Flower Festival to be held at the end of July to support Burrswood Hospital in Groombridge. 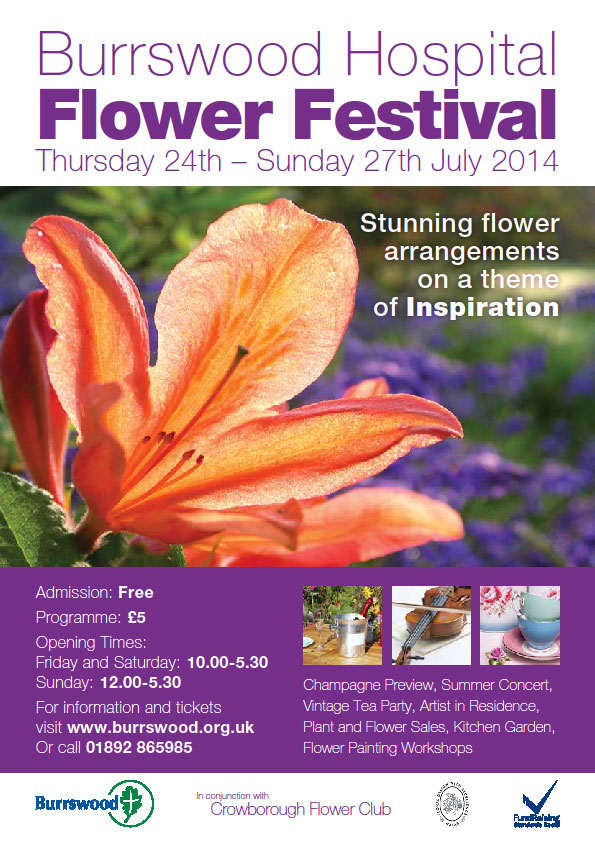