To compare how Wealden is doing with other authorities.  In 2012/13, the last year when national figures are available, the average in England was 43.2%, but this hides much variation.  In the South East the rates ranged from 12 to 60%.  One of the better authorities locally was Tunbridge Wells which recycled 46.0%.  Lewes was particularly bad down at 22.3%. 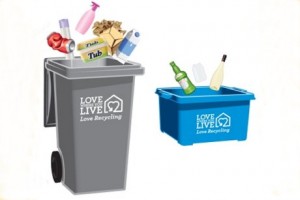 This is fantastic news.  It shows that the new recycling system introduced by Kier makes it easier for people to recycle and I get plenty of feedback that people like the simplicity of the new system.

I would like to thank residents for the commitment they have shown to recycling.  I know we had a difficult start to the new round structure last summer, but by working together, we have shown we can achieve really good recycling results.  I’m looking forward to the District achieving a 50% recycling rate in the not too distant future.

Wealden’s year end performance statistics also highlight the new uses which waste is being put to in East Sussex.  Much residual waste is now being used to generate power for the National Grid from the Newhaven Energy Recovery Facility.  This means the amount of waste from Wealden that ended up in landfill last year was just 3.8%.

There has also been a slight reduction in the amount of waste produced by Wealden households, according to collection figures, which may be an indication that households and businesses are Reducing and Re-using as well as Recycling.

Reduce, Re-use and Recycle are the three Rs of waste reduction. Find out more on the Recycling pages of the Wealden website.