Bird watchers flock to the Ashdown Forest after a rare Short-toed Eagle has been spotted there. 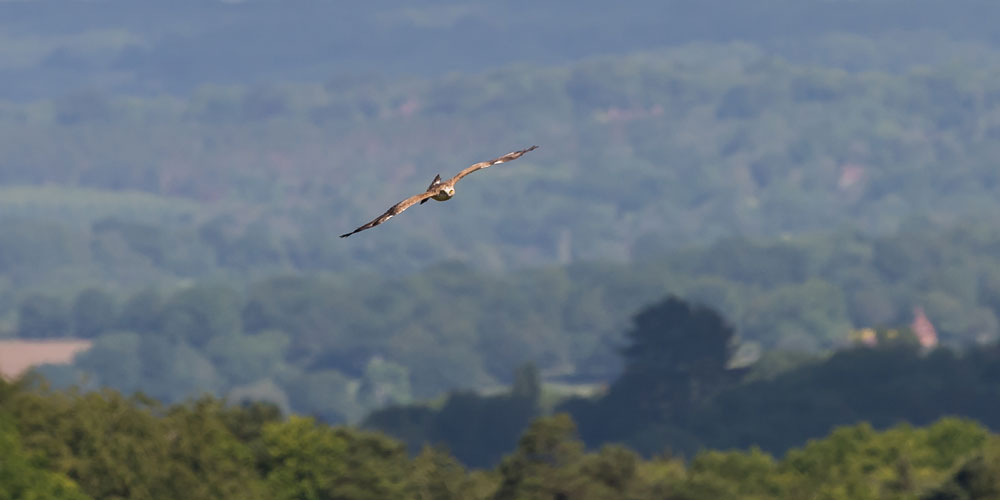 The Eagle was first seen in the area about a week ago, and since then it has been seen regularly cruising around Gills Lap and over towards Sharpthorne. Committed bird-watchers or twitchers will travel long distances to see a new species to add to their list.  In Twitcher terminology the Short-toed Eagle is classified as a “Mega” or “Megatick”, a bird which is exceedingly rare or otherwise highly desirable. Peter Johnson of the Ashdown Forest Bird Group said:

It was a bit of a shock finding out there was a Short-toed Eagle spotted on the Forest!  This is an incredibly rare bird here in the UK, perhaps only the third ever recorded and most definitely a first for Sussex.  The closest these birds get to the UK is Southern France and Spain, and then migrate back to Mali in Africa.  With such a large and strong flying bird of prey it has probably come up from Spain.

The only previous official UK sightings have been on the Isles of Scilly in 1999 and in Jersey in 2011.  But earlier this month a Short-toed Eagle, probably the same bird, was spotted at a nature reserve in Dorset, this was thought to be the first sighting on mainland Britain.  Recently there has also been a sighting in the New Forest, so it is visiting heathlands on its journey east. The official adjudicator of rare bird records in this country is the British Birds Rarities Committee, they assess claimed sightings of bird species based on descriptions, photographs and video recordings submitted by observers. These incredible pictures of the Eagle on the Ashdown Forest were taken by John Stanton from Crawley.  You can see more on his Flikr site. 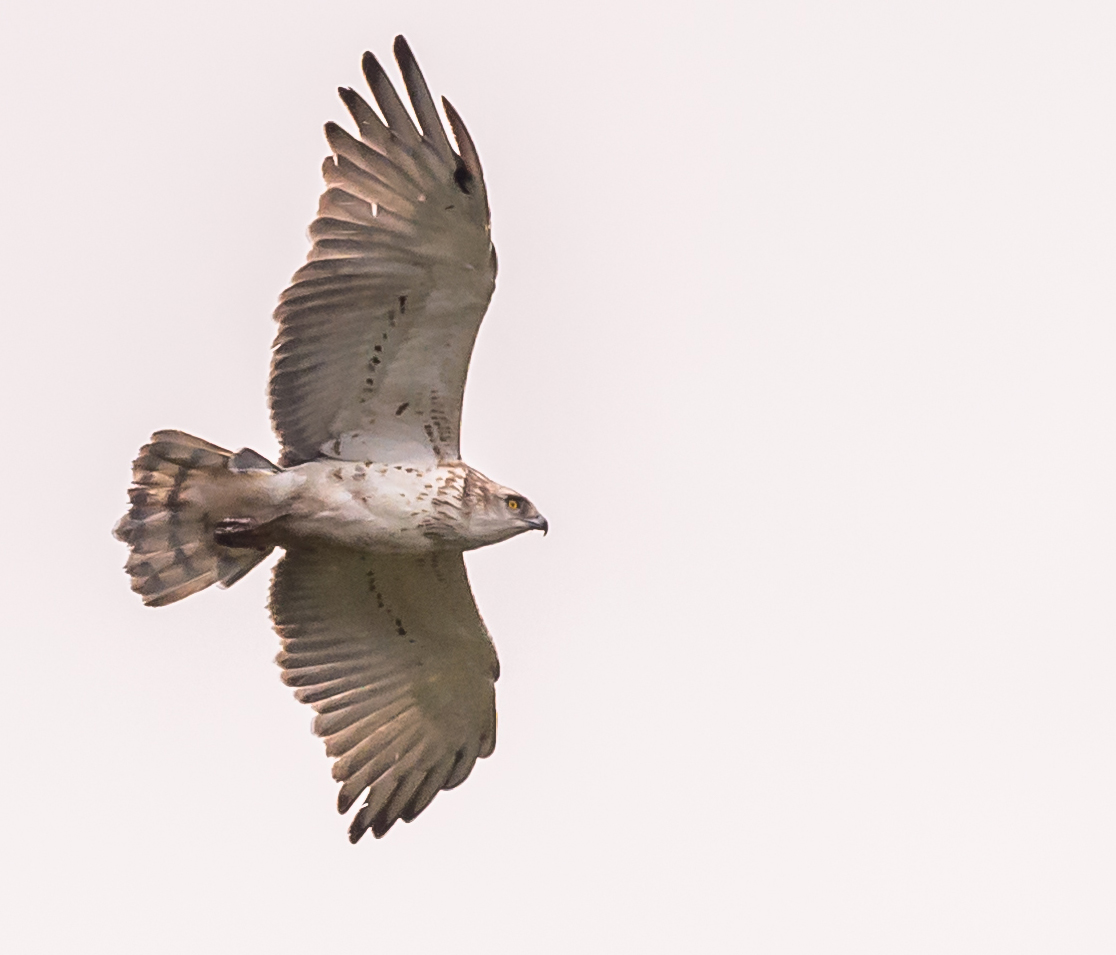 The Eagles (Circaetus gallicus), also known as the Short-toed Snake Eagle, can live up to 30 years and have a wingspan of up to 6ft (190cm).  Lizards and snakes make up an important part of the Eagle’s diet.  The bird has been seen catching snakes on the Forest by bird-watchers.  The rare heathland on the Ashdown Forest has a healthy population of reptiles, including Adders.

The Short-toed Eagle in Sussex doing what they do best, great shot by Matt @_MattEade pic.twitter.com/wnXqzVIsGs

Visitors are also being requested not to get too close to the Eagle and to use common sense.  Peter Johnson from the Ashdown Forest Bird Group asks people to be aware of ground nesting birds:

We would ask anyone wishing to visit to see the bird to please keep to footpaths and control dogs, there are plenty of nesting birds including many that nest on the ground.

See latest article about the Conservators of Ashdown Forest not been impressed by the behaviour of some of the people coming to see the Eagle.

On Twitter, twitchers are saying how the Eagle seems to know the Forest “like the back of it’s hand” and they hope it will stick around for the rest of June.

It’s fantastic that the Short-toed Eagle has remained in the area for so long allowing the opportunity for lots of people to see this magnificent, and incredibly rare, bird.

For free rare bird sightings, including updates on the Short-toed Eagle, follow Rare Bird Network (@rbnUK) on Twitter.  More details on how to take part and share your sightings with other birders can be seen on their www.rarebirdnetwork.co.uk. 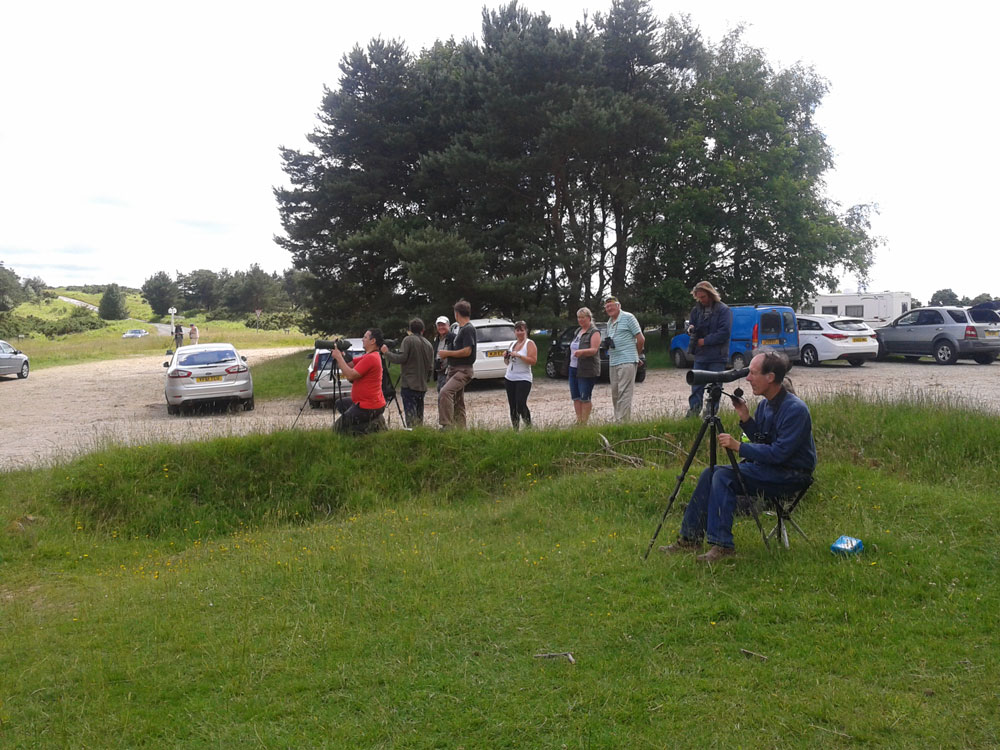 You should be able to distinguish the short-toed eagle from our resident big raptors buzzard and red kite.  It is much paler than these two and is almost completely white underneath the wings, and it hunts by hovering over an area searching the ground for prey.  But probably the best way to identify it is to look at the hundreds of binoculars, telescopes and cameras trained on it from excited birders, you’ll definitely know you’ve got the right bird then.

It has been a good month for bird-watchers in Sussex.  As well as the Short-toed Eagle, a pair of Black-winged Stilts , a rare Mediterranean wading bird have successful bred at RSPB Medmerry near Chichester.

Originally a deer hunting forest in Norman times, the ecological importance of Ashdown Forest’s heathlands is reflected by its designation as a Site of Special Scientific Interest, as a Special Protection Area for birds, and as a Special Area of Conservation for its heathland habitats.

It is a great place for walking and enjoying spectacular views over the Sussex countryside and is known the world over as 100 Aker Wood in the Winnie the Pooh books.

AA Milne wrote the stories about Pooh, Eeyore and Tigger for his son Christopher Robin whilst living at Cotchford Farm in nearby Hartfield.  A memorial plaque, near to where the Eagle has been sighted, was unveiled by Christopher Robin Milne in 1979, to commemorate the work of his father and illustrator EH Shepard.

For more information about walks in the area, the habitat and the associations with Winne The Pooh download the leaflet Pooh Walks from Gills Lap.

Later the Cotchford Farm was to have another famous owner: Brian Jones, former guitarist with The Rolling Stones, sadly drowned in the swimming pool there in 1969.

Gills Lap car park where the bird has been regularly seen is at the junction of Kidd’s Hill and Chuck Hatch Road, and is marked as No 10 on the map.

The Ashdown Forest is an important and rare habitat – for more information about the bird and reptile species that are found there take a look at the Conservator’s website.