Friends have been paying their respects to Wealden District Councillor Peter Cowie who passed away on Monday.  A moment of silence was held at the start of last night’s Town Council meeting and the flag at Crowborough Beacon Golf Club will be flown at half-mast.

Peter was born in 1940 at Stockton on Tees but was brought up after the war in Surrey.  He was awarded a degree in civil engineering at London University, and worked in the Department of Environment before joining Anglian Water. 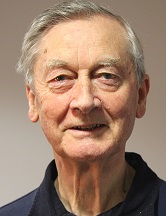 Peter moved to Crowborough fifteen years ago.   In 2005 he joined a group working towards setting-up a new Community Centre for Crowborough.  Chantal Wilson DL, current Chairman of the Crowborough Community Association (CCA) spoke about his involvement in the project:

When Peter Cowie lived in East Anglia, he had been involved with his local village hall and subsequently was instrumental in finding funding for and delivering a new hall.  He joined the CCA when its old hall was rapidly declining and quickly became involved in the campaign for a new one.  The CCA was very fortunate that someone with his experience in delivering a new hall arrived at just the right time!

Peter was one of a band of loyal CCA activists who sat up until 3 in the morning on several occasions, gathering data and writing a bid to the Lottery for funding for the Centre.  I am delighted that Peter lived to see the Centre come to fruition and he was rightly proud of the contribution he made to it.

Peter was chairman of the CCA during 2010 which was at time of intense activity in respect of the new Community Centre project.  He never stopped giving his all to the project.

All the members of the CCA will miss Peter very much indeed, especially for his outgoing personality and the dedicated way in which he championed the CCA in seeking to contribute positively to the Town’s future.

In 2007 Peter became a Town Councillor and served as Chairman of the Sports, Recreation and Cemetery committee for 5 years.  He was elected as Crowborough’s Mayor in 2013.

This year Peter decided to stand for Wealden District Council.  Cllr Greg Rose who was elected alongside Peter to also represent the Crowborough East ward said he would miss him deeply: 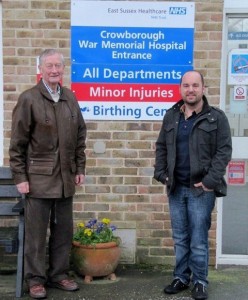 I’m devastated to hear of the passing of my friend and fellow District Councillor for Crowborough East, Peter Cowie.  In the relatively short time I knew him he taught me so much drawing on his experience as a Town Councillor and former Mayor of Crowborough.  He was a man of honour and a strong campaigner for the community.  My thoughts go to his wife Marion and family.

Peter was a respected and popular member of Crowborough Beacon Golf Club where he not only just played golf but played an important role as a member of the Club’s Public Relations Committee.  Ray Jackson said, “his wise counsel and incisive wit will be sadly missed.”

Cllr Ron Reed who succeeded Peter as Crowborough Mayor in 2014 said he was very saddened at the loss of Peter:

He was a very proactive Councilor who cared about Crowborough and was always in the forefront of any debate.

During his term as Mayor he devoted a lot of his time to fostering relationships with the other parishes around us and became friends with several of the Parish Clerks.
When I took over as Mayor from Peter he placed the chain of office around my neck and wished me good luck as I was about to lose my private life to a good cause.
This is something he would remind me of each time we met by asking me if I still enjoyed being Mayor and to remember to smile as I represent the town.
When Peter was elected to serve on Wealden District Council we all hope for many good debates but sadly this will not now be the case.
Peter love to play golf and I can only hope that where he has gone to will allow him to continue with his passion.

There will be a memorial service on Monday 16th November at All Saints Church starting at 11.30am.  Rather than sending flowers mouners can make a donation to the Hospice in the Weald via the funeral directors Tester & Jones.