Wealden District Councillors choose to go against the advice of East Sussex Highways and the recommendation of their own Planning Officer to approve the development.

Two neighbours spoke at the meeting and the two elected representative for the area (Cllrs Philip Lunn and Greg Rose) supported their position with written submissions (which were read aloud by the Chairperson).  You can watch the presentations and the Councillors’ discussion on video below (click to play):

After Councillors discussed possible arguments for turning down the application, on the advice of Planning Officers, they decided to use two “saved” transport policies from the 1998 Adopted Local Plan as their justification: TR3 Traffic impact of new development and TR1 Environmental impact of new road proposals.

If the applicant decides to appeal the Planning Committee’s decision, the matter will be heard by the Planning Inspectorate.  The Head of Planning spoke at the meeting about appointing their own independent transport expert to defend the Council’s position, if this eventuality arises.

During the discussion, in reply to a question from a Councillor as to why there was no affordable housing included in this application, the North Team Leader Stacey Robins clarified the situation.  Since the Government won its appeal, local planning authorities could not currently seek affordable housing on developments of 10 units or less, even though in Wealden’s policy the threshold is set at five or more new properties.

The applicants, Mr and Mrs J Carruthers, want to demolish the existing property “Sandygate” and build a smaller 3-bed house, along with an additional two 3-bed detached houses and six 4-bed houses on the garden and a paddock to the rear.  In total it is intended to provide 24 car parking spaces, including car ports and visitor spaces.

Local authorities are required to demonstrate that they have a five year supply of land for housing development.  The “Design and Access Statement”, submitted with the application, argues Wealden District Council can only currently deliver 2.61 years of housing land and because of this there should be presumption in favour of sustainable development as set-out in National Planning Policy. 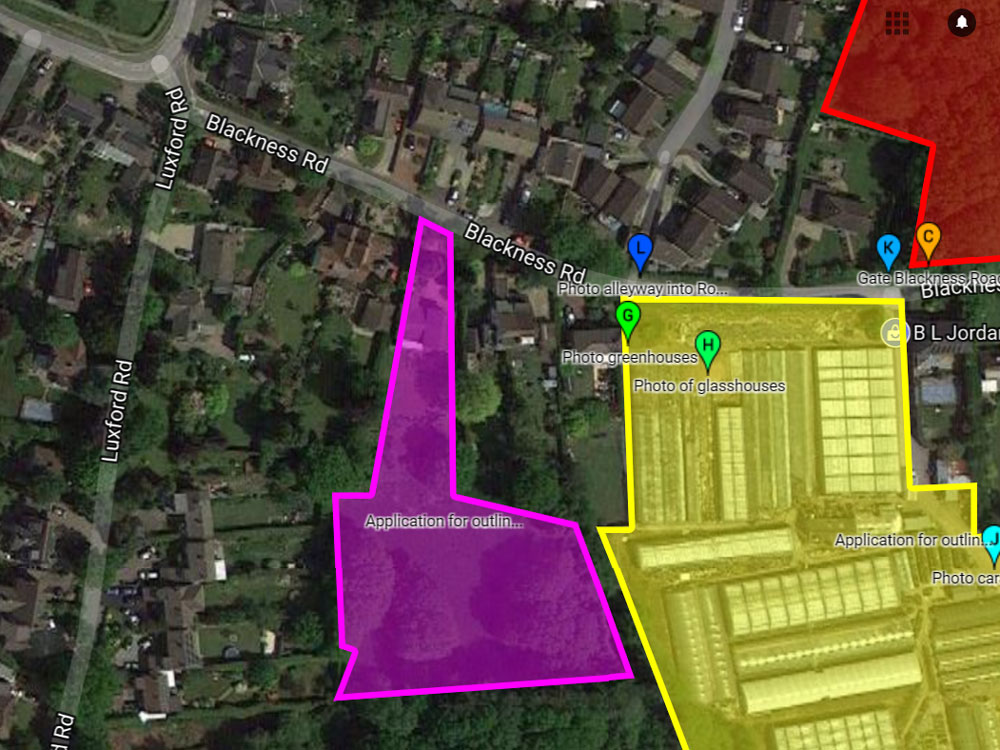 An application was granted in October 2016 to build 34 properties on the adjacent Jordan’s Nursery site, and this application will utilise minor modifications to improve access via Blackness Road, dictated by conditions laid down in the Jordan’s application.

Click on the following link to see the application.  Residents have until 12th September to comment (Ref: WD/2017/1732/O): www.planning.wealden.gov.uk.