Residents living near burglary victims are to be visited by Sussex Police to help them avoid becoming a target.

Officers and Neighbourhood Watch volunteers across the county will visit people living close to the scenes of break-ins within days of the crime to warn them about what has happened, show them how they can make sure their home is secure and gather information that could help catch offenders.

The tactic has been trialled in Hove where a dramatic reduction in burglaries in the area has followed and is now being rolled out across the force.

It is part of Operation Magpie, Sussex Police’s crackdown on burglary across the county.

There have been 27 reported burglaries in Crowborough in the first-half of 2014 (compared to 25 in the same period in 2013).  The highest number of burglaries are in the North and West of the town. However in the last month data is available (June 2014), no burglaries have been recorded in the town at all.

Sussex Police say most burglaries are committed by opportunist thieves.  In two out of ten burglaries no force is used, they simply enter through an open door or window.   The enemy of the burglar is noise and time.  Crime prevention officers say burglars can be put off if your security measures mean that they have to take more time or make a lot more noise,

Burglars try to maximise the amount they get from their crime while minimising the time they have to find looking for a house to break into and the chance of them being caught.

By warning local people when there has been a burglary we can not only reduce the chance of them becoming a victim but also force the offender to take more of a risk to commit crime.

That means the burglar may move to an area they do not know well so they are more likely to leave evidence behind at the scene or to be caught in the act.

Everyone can help us tackle burglary in Sussex by taking every step possible to keep their home secure. Simple measures like double-locking your front door and using window locks have been proven to be effective deterrents against offenders.

Also, every burglar we take off the streets means fewer victims of burglary so we would encourage members of the community to contact us if they see anyone acting suspiciously in their area. We can all work together to make Sussex a no-go area for burglars.

Across the rest of the force the number of burglaries fell by 21% during the same period.

In Hove, 90% of people visited said they were more likely to report suspicious behaviour to the police after the trial and 70% increased their home security following a visit from police.

Sussex Police are also encouraging residents to register their valuables on immobilise.com, a free website that enable police forces to trace owners of lost and stolen property:

The main aims of Neighbourhood Watch are to prevent crime, reduce the fear of crime and improve safety. It’s about people looking out for each other, crossing barriers of age, race and class to create strong cohesive communities that benefit everyone.

Neighbourhood Watch has been involved in Operation Magpie since it started. I am delighted that we are taking an active part to help our partners in Sussex Police in keeping our homes and streets safe; places where crime cannot flourish, with communities that care. 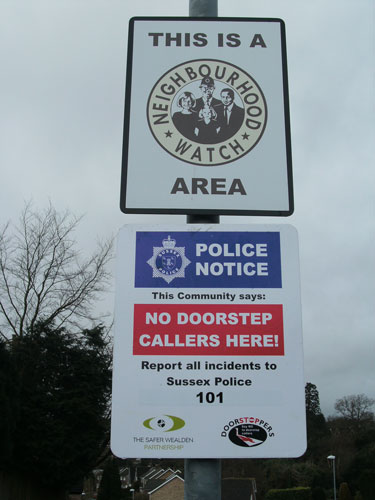 At present, the Sussex Neighbourhood Watch Federation does not have a local representative in Crowborough.  If you would like to find-out how you can get involved and help reduce crime in the town, please contact John by emailing enquiries@sussexnwfed.org.uk or phone 01293 540577.

If you have any information about burglaries, please call 101 or email 101@sussex.pnn.police.uk.

If you see or hear a burglary taking place call 999 immediately.

You can view the crimes statistics in your neighbourhood and by clicking on the More details>> link you can see the current status of the investigation.  The website also shows you how you can contact your local policing team and see the policing priorities for your ward: