A motorist who caused a serious crash between Crowborough and Uckfield, leaving an elderly woman from Rotherfield with life-threatening injuries, has been jailed. 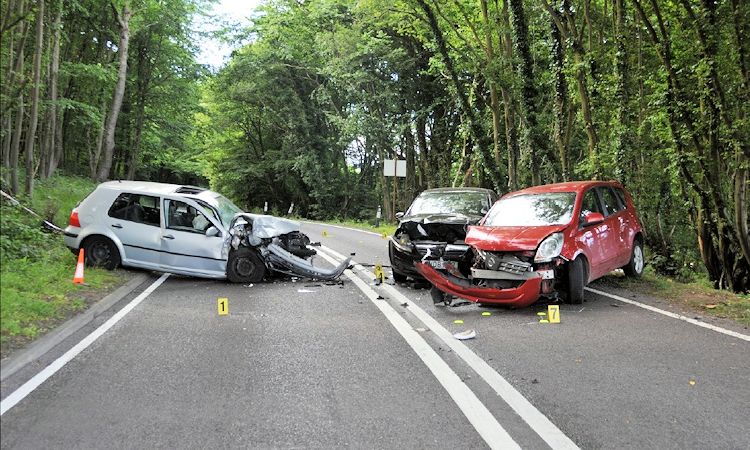 Peter Jason Harris was sentenced to three years’ imprisonment following the three-vehicle collision on the A26 at Heron’s Ghyll.

He had been travelling northbound at about 3.35pm on 25th June 2015 when witnesses described seeing his silver Volkswagen Golf cross the solid double white lines in the centre of the road – which is prohibited under the Highway Code.

While on the wrong side of the road, he struck a red Nissan Note travelling in the opposite direction. The driver – 70-year-old Margaret Pattenden, from Rotherfield – attempted to avoid a head-on collision by mounting the nearside embankment, however the impact forced the rear of her vehicle to hit a row of trees lining the road.

The collision then caused a black Vauxhall Corsa, also travelling southbound, to hit the side of the Nissan. All three cars were written off.

Mrs Pattenden was taken to St George’s Hospital in Tooting with serious spinal injuries which required an operation. She now has life-changing injuries and requires a wheelchair.

The driver of the Vauxhall – a 67-year-old man from Uckfield – was taken to Princess Royal Hospital in Haywards Heath with minor injuries.

Meanwhile Harris was taken to Pembury Hospital with minor injuries.

The 33-year-old, of Scotts Way in Tunbridge Wells, Kent, was later voluntarily interviewed and summonsed to court in connection with the incident.

He was sentenced to three years in jail and will be disqualified from driving for three years on release from prison.

The victim in this case suffered horrendous injuries; ones that she will have to live with for the rest of her life. Peter Harris drove his vehicle that day in a dangerous manner, he lost control, crossed onto the opposing carriageway and collided with two other vehicles. His actions, and the victim’s injuries, were entirely avoidable. Harris was sentenced to three years imprisonment, however the victim will need life-long care and assistance.

We will continue to relentlessly pursue drivers who drive in a dangerous manner, and I hope that this sentence will act as a deterrent to those who flout the law. I would urge people to report dangerous drivers via Operation Crackdown by visiting www.operationcrackdown.co.uk.

We’d like to thank the emergency services and the hundreds of people involved in mum’s care since 25 June 2015. It really is a miracle that she didn’t die that day and we’re all grateful that she has been able to regain some quality of life, although she’ll never be the same again and it wasn’t the start to her retirement that any of us wanted.

All that can be said of the crime itself is that double white lines in the middle of main roads mean “do not cross” under any circumstances.

We hope to move on from this now and concentrate on getting mum finally settled back in her village and help her to have the best retirement possible, under the circumstances.