The youngest member of the Gilbert family, Evan Gilbert will be laying a wreath at Chapel Green in honour of his 3-times great uncle, John Ernest Gilbert, who was killed in action in France in 1918 and whose name is listed on the Crowborough War Memorial. 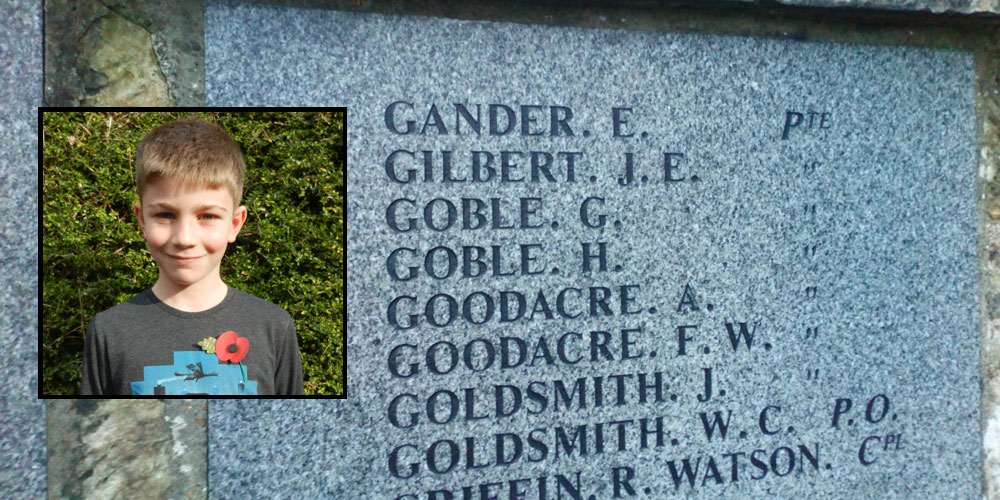 John Gilbert was born in 1891 and was brought up in Crowborough.  He is listed in the 1911 Census as living at Welfield Farm in Church Road Crowborough and employed as a hansom cab driver.  He volunteered to join the army in 1914 with thousands of other young men and was enlisted into the Sussex Yeomanry in Brighton.  He went on to serve as a private with the 7th Battalion, Queen’s (Royal West Surrey Regiment).

John was killed on 26th April 1918, just 4 months before the end of the war during what became known as the German Spring Offensive on the Western Front, aimed to recover ground the Germans had lost in the Somme battles of 1916.  John’s name is listed on the Pozieres Memorial near the town of Albert in Northern France, one of the 14,655 causalities of the war who are recorded there as having no known grave.

Evan lives with his parents in Fairlight and is a pupil at Guestling Bradshaw Church of England School. His father Maxwell is a serving fire fighter with the East Sussex Fire & Rescue Service.

Evan’s great-aunt, Marlene Jackson, who lives in Heathfield, learned of John Gilbert’s tragic death when researching family history for her grandson who was going to France on a school WWI Battlefields trip in 2017.  Looking into it further, she discovered John’s name was recorded on the Crowborough War Memorial.

Marlene and her husband contacted the local branch of the Royal British Legion who were happy for the family wreath to be laid as part of the Armistice Day ceremony at All Saints Church as it is a unique occasion for the laying of a wreath directly linked to an individual named on the memorial.

Others who will be attending the ceremony will be Evan’s grandfather Clive Gilbert who lives in Iden near Rye and other family members who live in Tunbridge Wells and in Weybridge and Woking in Surrey.