Many furious residents have taken to social media after receiving a penalty notice.  Many of the drivers affected use the waiting area at the front of the station. 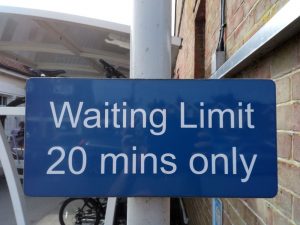 Yes dropped off in the morning and picked up in the evening and car spent the day in a garage being serviced and MOT’d and I got £100 fine for the pleasure!  Have submitted evidence car was elsewhere (as required) and am awaiting result of appeal.

An Automatic Number Plate Recognition (ANPR) system was installed in Crowborough last year.  The technology reads the number plate of a vehicle when it enters and exits the car park and checks that payment has been made for that period of time.  There is a 20 minute grace period for dropping off and picking up passengers.

The problem seems to be the system is missing cars exiting the car park and assuming the car has been parked there all day without a ticket or until the vehicle returns on another occasion.

Lucy Palac told CrowboroughLife about the issue and explained that she was already in touch with 10 others in the same boat.  Lucy’s penalty notice has her car arriving at 8.06am but not leaving until 8.12pm, despite her driving to work 17 miles away:

I dropped my husband off quickly in the morning to the station on 13th December 2018 and picked up again in the evening on the same day.  I received a penalty letter a few weeks later stating I’d parked in the car park all day however, I was at work all day in East Peckham with my car parked outside.  My employers have provided written confirmation of this.   This is extremely stressful for everyone involved and completely unnecessary.

The automatic number plate recognition technology is extremely reliable but it can be affected by many different variables, such as dirt or snow on the number plate, and also if the car in front or behind is so close it blocks the view.

This would be a very rare occurrence which perhaps explains why we know of only two cases where this may have actually happened, even though the system has been in place since the start of October and  this is a very busy 140-space car park with lots of vehicles passing through.

We are not in the business of catching people out which is why we have already started to check the positioning and accuracy of the cameras and will make changes if required.

Meanwhile, all our passengers are entitled to appeal an enforcement notice with the option to appeal further to an independent body if they are not satisfied with the outcome.

Kelly Woodgate has a similar story to others.  She commutes to London from Crowborough and her fiancé drops her at the station.

In January we got a parking ticket through the post for £100 saying that we had parked over night.

Obviously this is my fiancé picking me up on the Monday evening and dropping me off on Tuesday morning.  But they are saying we parked the car overnight without a ticket and have issued the fine.  The evidence they have given us are pictures that are pitch black.

We of course contested it but they have rejected the appeal and have said for the fine to be dismissed we have to prove we didn’t park overnight. How am I meant to prove I parked my car on my drive overnight, I do not tend to take a picture

As a company we are now receiving weekly penalty notice from Indigo Parking Solutions Limited.

We have a fleet of 17 vehicles and we are in and out of Crowborough station daily for pick ups and drop offs.  The cameras don’t seem to be working on the exits, as they are trying to say on different penalty notices that my vehicles are in the station for anything up to 7 hours a time.

I keep appealing.  Upon sending the vehicle and driver’s sheet proving the car and driver have done a number of jobs during the times stated, the penalty notices have up until now been dropped.

With the last appeal they are now saying I need to provide CCTV evidence showing the car in a different location during the times they state it was in the station.  This is near impossible as no one will give out CCTV because of data protection.

I had a long conversation with the parking management company today.  They have said their client is refusing to accept my appeal and unless I can provide CCTV.  I’ve basically now just got to sit tight and wait to see if the company take me to court, where I can then show my evidence of the driver’s sheet again.

This ongoing matter is putting a great deal of stress on me and the company.

Something has got to be done.

Have you received a penalty notice?  Join in the conversation on Facebook or add a comment below.