Beacon Swimming Club celebrates its 40th Anniversary with a Club Anniversary Day on 11th June at the Crowborough Leisure Centre.

The Club was founded in September 1976 and was originally formed for swimmers at Beacon School to train but was soon opened up to all swimmers in the Crowborough area. 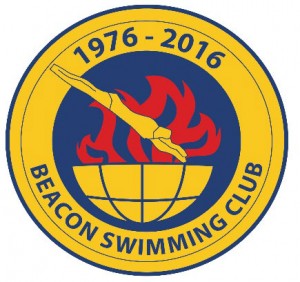 Since that time the Club has helped swimmers from the local community to learn, enjoy and compete in swimming and in life saving to the highest levels.

The Club has recently enjoyed one of its most successful periods over the last 40 years with a record number of County and Regional swimmers and with swimmers attending Olympic Trials at the British Swimming Championships in April and medaling at ASA Nationals last year.  The Club’s life savers have also had their greatest year qualifying for the World Championships in Holland in September and also with medalists at Life Saving Nationals.  The Club is also enjoying international success with two swimmers selected for Team GB in Biathlon and with life savers also selected for Team GB in life saving.

The Club would welcome any one that has swum with the Club, or been involved with the Club over the years, to join the 40th Anniversary celebrations on Saturday 11th June which starts at 2pm with a special combined swimming and life saving gala followed by a BBQ and Club history display.  If you would like to attend or require further information please send an email to the Club at: beacon.sc@swimclubmanager.co.uk.