Crowborough Hockey Club are celebrating their 50th year by holding a men’s and ladies’ “Past vs Present” game. 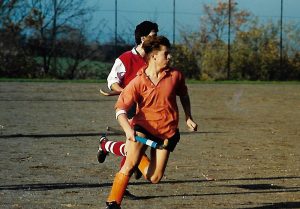 Players who have represented the club in seasons going back as far as the 1960s will take on the current squad.

The Club’s website explains that the inaugural meeting was held In December 1968 at the Wolfe Recreation Ground, with sixteen players joining the first practice game on Sunday 18th January 1969.  The first competitive match was played against Crawley on 25th January with a final score of 4-4.

The Club have reached out to past players but are keen to hear from anyone else who wore the orange of Crowborough and would like to be involved.

Among those playing on the day is Club President Hilary Brown, who was part of the formative years of the squad and is still on the playing roster today, having made nearly a dozen appearances last season despite trying to retire!  Her son, England Veterans player, Ian Brown will also be back in Orange.

Also playing and part of the 50th Celebrations organising committee is Chris Green.  He said:

Hockey is a game where true friendships are formed.  I would not be the person I am today without Crowborough Hockey Club.  Meeting Ron Easton at the cricket club was the best thing that happened to me – he persuaded me to play hockey too!

I’m looking forward to the Past versus Present games, the chance of seeing some old faces and new.  I’ve been coaching at the club since 1999 so this is going to be a fun year meeting up with people I haven’t seen for a while.

The matches will take place at the Astroturf Pitch at Beacon Academy on Sunday 14th October.  The ladies will play first at 10.30am with the men taking to the pitch at 11.45am.  Afterwards everyone will be invited back to the clubhouse for a celebratory lunch.