The planning consent is subject to a number of conditions about the materials used in order to maintain historic character of the building.

JD Wetherspoon apply for a licence for The Crowborough Cross to open at 7 in the morning and stay open until 1.30am on a Friday and Saturday night

JD Wetherspoon have shortlisted four names for the pub and residents can vote for their favourite on The Courier newspaper’s website.

What do you think the reopening of the pub will mean for Crowborough?  Post your comments below or use #CrowCross on Twitter.

The Cross is in a conservation area, the pub being the only listed building in the town centre.  Wetherspoons want to retain and reuse as many of the buildings features.  They propose to repair the sash timber windows and repaint the exterior.  They say new extensions will have a sympathetic design to complement the existing features. 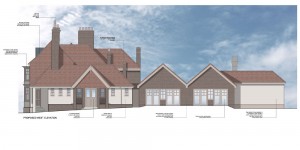 In the planning application to Wealden District Council, JD Wetherspoon say they want convert The Cross into a traditional Public House, place a greater emphasis on the dining experience and create a focal point for the town centre of Crowborough:

JD Wetherspoon offer a friendly service that is responsive to the needs of customers and as a result JD Wetherspoon wishes to expand their business into Crowborough by renovating this vacant building.  The result of this renovation will provide the much needed response to meet the needs of their potential customers.

The new kitchen will be accessed from a new rear gate on the High Street for deliveries and refuse collection.   The current outbuilding to the rear of the site is to be removed to make way for the new extension.

A refurbished, up to date, vibrant pub/restaurant will be an asset to the town centre.  The Chamber hopes that the application does not fall foul of the Ashdown Forest Habitats directive and will be following the application with interest.

At a recent meeting of local businesses, there was criticism that measures to protect the Forest were ‘stifling’ the local economy.  The planning application argues that although the extensions will provide 99 square feet of additional space for customers, because there will be an increased emphasis on food sales, more people will be seated.  Wetherspoon therefore do not anticipate greater occupancy of the pub nor more car journeys.

The delay in reopening the pub, after it was acquired from previous owners Punch Taverns, led to speculation in the town that plans have been shelved.  A Facebook site was established to campaign for the pub to be returned to its former glory.

Detail plans developed by Manchester based Harrison Ince Architects LLP can be viewed on the Wealden District Council website (WD/2014/0214/LB).  The Planning Committee (North) next meets on the 8th May, although it is unclear whether the application will be considered at that time.

Crowborough Town Council’s Planning and Development Committee considered the plans on 7th April.  They recommend Wealden Council approve the application.  Their comments were as follows:

The Town Council support the soonest re-use of this building and
trust that Wealden District Council will make a swift approval on
this application.

Trevor Thorpe of Fermor Way has written to Wealden District Council in support, in his letter he says:

I hesitate to say “former glory” because for the 30+ years that I have known it I feel that it has been an eyesore with unrealised potential as a gathering place for all ages.  I am confident that Wetherspoon’s will greatly improve it.

J D Wetherspoon has over 800 sites and accoring to its annual report currently has 11 sites under development.  At a time when as many as 26 pubs are closing each week, Wetherspoon is bucking the trend and expects to open 40 to 50 pubs in the coming year.

There has been an inn on the site since at least the late 16th century, although the present building dates from the early 19th century, when it was known as the Red Cross Inn.

Recently the Curator of the Conan Doyle (Crowborough) establishment told CrowboroughLife that the re-opening of the Crowborough Cross might give a chance to exhibit some Conan Doyle memorabilia there again.  In the article Brian Pugh also suggested “Conan Doyle” might make a good pub name.

At this stage, Wetherspoon cannot say when they hope to reopen the pub.

Business
4 comments on “Plans approved to extend The Cross”