Update (Feb 2017): Following a request by a member of the public to commemorate the life of Piers Sellers, Crowborough Town Council have agreed to request Wealden District Council name a street after him.

NASA has announced that astronaut and climate scientist Piers Sellers, passed away on Friday (23rd December) in Houston of pancreatic cancer. 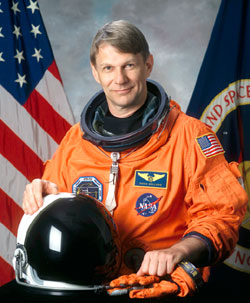 The entire NASA family mourns the passing of scientist and astronaut Piers Sellers.

Piers was dedicated to all facets of exploration.  His curiosity and drive to uncover new knowledge was generously shared with audiences around the world, both from space and in wide travels to reach as many people as possible with an essential understanding of our fragile planet.

Sellers was born in Crowborough and went to Cranbrook School in Kent, where as an air cadet he trained to pilot aircraft.  As a young boy in England, Sellers watched the Apollo landings in awe.

He gained a BSc in ecological science from Edinburgh University and a PhD in biometeorology from the University of Leeds.

Piers Sellers left the UK in 1982, moving to the USA where he began his NASA career as a research meteorologist.  He became a US Citizen in 1991 so he could become a NASA astronaut.  Piers Sellers flew on three space shuttle missions in 2002, 2006 and 2010.   Sellers logged over 500 hours in space, including 6 spacewalks.

Saddened to hear the loss of British born astronaut Piers Sellers – a true inspiration. Thoughts are with his family. https://t.co/mLFXphzGuQ

Writing in The New York Times in January he revealed he had been told he had Stage 4 pancreatic cancer.    He wrote:

As for me, I’ve no complaints.  I’m very grateful for the experiences I’ve had on this planet. As an astronaut I spacewalked 220 miles above the Earth.  Floating alongside the International Space Station, I watched hurricanes cartwheel across oceans, the Amazon snake its way to the sea through a brilliant green carpet of forest, and gigantic nighttime thunderstorms flash and flare for hundreds of miles along the Equator.  From this God’s-eye-view, I saw how fragile and infinitely precious the Earth is.  I’m hopeful for its future.

After 14 years as an astronaut, Sellers returned to the Earth Sciences Division at NASA’s Goddard Space Flight Center in Greenbelt, Maryland.

Piers came to Goddard in 1982 from his native Britain and ultimately left a legacy that few can claim.  His career path took him from scientist, to astronaut, and back to his roots as a leader in Goddard’s Sciences and Exploration Directorate.

After learning he had pancreatic cancer more than a year ago, Piers’ optimistic take on life – well-known within the gates at Goddard – inspired people around the world.  He spoke eloquently about his confidence in humanity’s ability to confront the challenges of climate change, even as he faced his own terminal diagnosis.

Piers devoted his life to saving the planet.   As a climate scientist, his work in computer modeling of the climate system, satellite remote sensing studies and field work using aircraft, satellites and ground teams broke new ground in our understanding of Earth’s systems.  His legacy will be one not only of urgency that the climate is warming but also of hope that we can yet improve humanity’s stewardship of this planet.  His cancer diagnosis became a catalyst for him to work even harder on efforts to save the planet from global warming for the benefit of future generations.

Piers was an eternal optimist whose positive energy inspired all those who had the good fortune to know him. His laughter, humor, and lighthearted spirit are as much a part of his legacy as his work.

In his three journeys to orbit as a NASA astronaut, he demonstrated robotics, performed research and helped build the International Space Station.  These journeys and his ongoing dedication to scientific inquiry inspired a new generation to take up his challenge to become better caretakers of Earth and extend humanity’s reach in space.  It was my great honor to present Piers with the Distinguished Service Medal in June 2016 in recognition of his service to our agency and the world.

Today we lost a tremendous public servant who was dedicated to NASA, the nation and the world.  He was a strident defender and eloquent spokesperson for our home planet, Earth.  Spacewalker and scientist, free thinker and friend to our planet, and all who seek new knowledge, to say he will be missed would be a gross understatement. 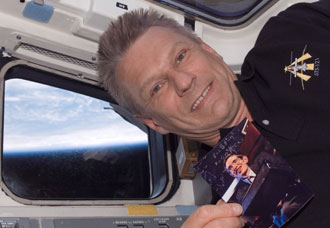 Astronaut Piers Sellers holds a photo of Dr. Stephen Hawking on board Discovery during the STS-121 mission in July 2006. Credit: NASA.