Georgia Allison of 1414 (Crowborough) Squadron Air Training Corps was awarded the Lord Lingfield Medal at a special CVQO ceremony at the House of Lords last week. 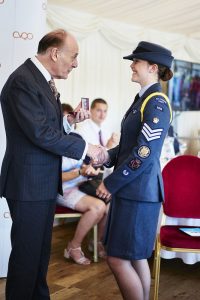 CVQO is an education charity offering vocational qualifications to uniformed youth organisations: BTECs, ILMs City & Guilds and so on.  The qualifications they provide recognise the skills young people and adult volunteers develop at those organisations and make them relatable to employers and places of further education.

Learners are nominated by their youth group in November for their altruistic achievements – for example: helped family members, contributed to their local community, raised money for charity or overcome a personal challenge.

After nomination, submissions are marked by a panel and then successful candidates are invited to attend a four-day residential selection event in Somerset in April.  As part of this, all candidates studied to achieve an ILM Level 3 in Leadership and Management.

The Lingfield Medal recognises a finalist who made a significant impression on us all down in Somerset.  Georgia’s achievements, enthusiasm, and maturity helped her to stand out in a field of very impressive cadets. Georgina and the other 10 finalists were given their ILM Level 3 Award in Leadership and Management by CVQO Chairman Lord Lingfield.

A Welsh air cadet was the overall winner.  Alex Anderson, from 1367 (Caerleon) Squadron Air Training Corps, was named the CVQO Westminster Award winner 2018 at the ceremony on Thursday 21st June.  Effectively the Lord Lingfield Medal is the second place award next to the Westminster Award.

The ultimate prize for the finalists is an educational expedition to South Africa in July, where they will work in local schools, engage with communities in KwaZulu Natal and take part in an environmental awareness course.

The CVQO Westminster Award has been going now for 16 years and it recognises those CVQO cadets who have consistently demonstrated an exceptional level of commitment, not only to the cadet services but to society in general.

Selection in Somerset was extremely difficult and the standard was very high, but these young people are going on a truly amazing trip to South Africa and they have certainly earned it.