Update:  Conservators of the Ashdown Forest have admitted the two wildfires were caused when they lost control of deliberately set fires.

In a statement The Conservators of Ashdown Forest said:

Unfortunately, a freak gust of wind combined with unseasonably dry conditions allowed the fire to spread beyond the area planned and about 35 hectares were affected.

At no point was there any danger to surrounding properties, and although the area affected was larger than planned, the effects on the habitat are likely to be beneficial in the longer term.

During the breakfast programme on BBC Sussex yesterday [Thursday 28th], their Vice-Chairman and Crowborough Councillor Sylvia Tidy, was interviewed about the risks of fire because of the unseasonable weather and made no mention of their cause (listen from 1:20:50): www.bbc.co.uk.

Small controlled burns are used routinely in the winter months to manage the habitat.  The first fire effected 35 hectares or an area equivalent to 50 football pitches.  In their statement, the Conservators have thanked the firefighters and their staff and volunteers who bravely worked to deal with the fires:

We would like to offer our thanks to everyone who helped us control and manage two fires which affected Ashdown Forest this week.  We are most grateful to members of the public who contacted us to report the fires’ spread and to firefighters from East Sussex Fire and Rescue, our staff and volunteers who promptly and bravely worked to deal with the fires.

The good news is that neither fire will cause any long-term damage to the habitat or landscape and only a small proportion of the forest, a little over 1 per cent of its 2,500 hectares, has been affected.  Visitors can continue to enjoy Ashdown Forest unaffected by these events, but we need to continue to be vigilant to the risk of fire on the Forest.

The smaller fire at Kidds Hill was the result of sparks from a bonfire, part of scrub control work being carried out by a group who regularly undertake conservation work for us.  The area affected was a little over two hectares.

The larger fire, in the area around the Old Airstrip, was the result of a planned burn for gorse management.  Gorse is an increasing problem on the forest and small controlled burning has traditionally been a routine method of managing it, in accordance with national guidelines.  Burns are carried out in February to avoid impacts on nesting birds. Three other burns had already been completed without incident in the week before the fire.

Ground and weather conditions were checked and monitored carefully before work began, with additional firebreaks cut. East Sussex Fire & Rescue were informed in advance and full risk assessment was carried out – standard practice in these cases.

Unfortunately, a freak gust of wind combined with unseasonably dry conditions allowed the fire to spread beyond the area planned and about 35 hectares were affected.

At no point was there any danger to surrounding properties, and although the area affected was larger than planned, the effects on the habitat are likely to be beneficial in the longer term.

We continue to monitor both sites with East Sussex Fire and Rescue to ensure safety.  We are carrying out a full evaluation and review of these incidents: as always, our focus is on protecting and enhancing the landscape and habitat of Ashdown Forest for the benefit of all.

The first was reported just after 12.30pm at Milbrook Hill near Nutley.  Seven appliances were sent to the scene, including specialist Land Rover, along with a Command Support Unit.   Both the police and the Highways Agency were also in attendance.

The second began about an hour later at Kidd’s Hill on the Ashdown Forest.  Four appliances were mobilised at 1.37pm to tackle the gorse and undergrowth fire, including crews from West Sussex.  It was later escalated to a six appliance incident.  Farm machinery used to create fire break and prevent spread.  Firefighter had left the scene by 8pm but returned on Wednesday to carry out re-inspections. 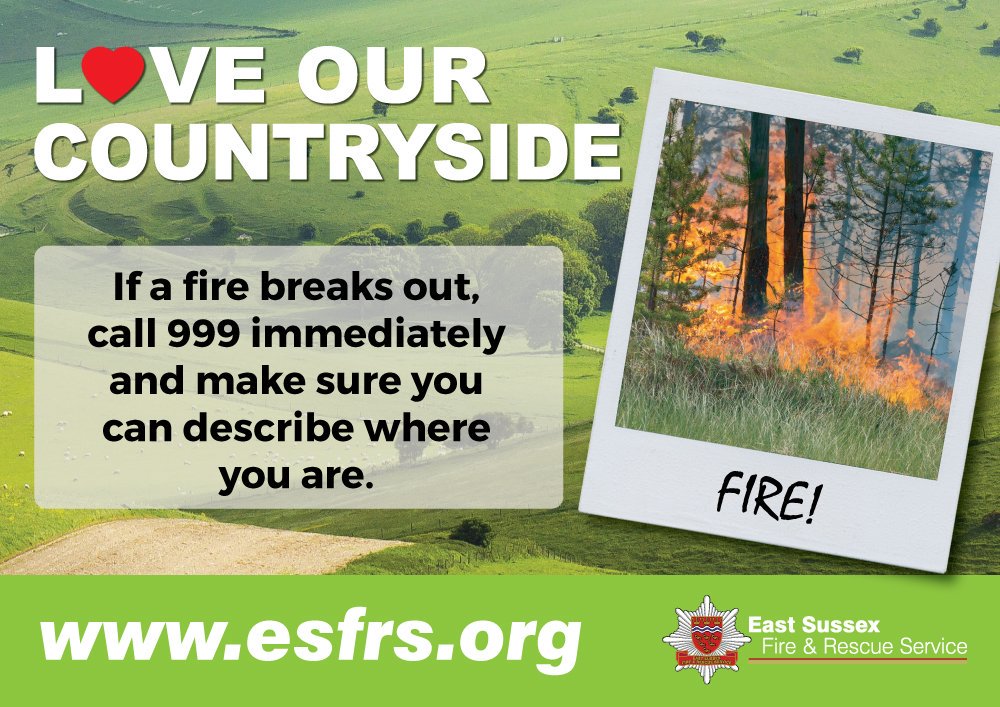 Members of the public are being asked to be extra careful while enjoying the outdoors and adhering to the Countryside Code:

Environment
One comment on “Cause of two wildfires on Ashdown Forest”