Councillors have voted to approve a planning application from Abbey Developments to build 68 flats and houses adjacent to Crowborough Community Centre on Pine Grove.

Objectors that had arrived by coach from Crowborough

On Thursday 5th April, by a 5-4 margin, Councillors on Wealden District Council’s Planning Committee (North) approved a controversial housing development on Pine Grove.  The site includes a “temporary” long stay car park, woodland and the Beaconwood building, previously the location of the Registration Office, which will be demolished to make way for one of the blocks of flats.  The land is owned by Wealden District Council and East Sussex County Council. 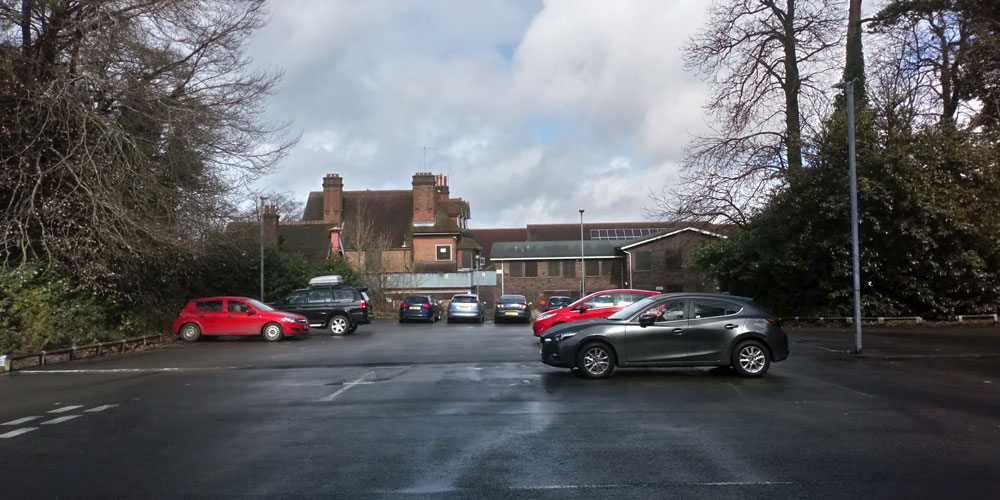 The Crowborough Community Association (CCA), which runs the adjacent Community Centre, fears that the loss of parking and close proximity of the development will have a disastrous impact on the viability of the Centre.

As reported at the meeting, the Highway Authority believes there is sufficient and adequate parking available to serve adjacent land uses, including the Community Centre.
Wealden District Council say there will still be 480 free parking spaces after the development, and this equates to a reduction of 17% in town centre car parking space. 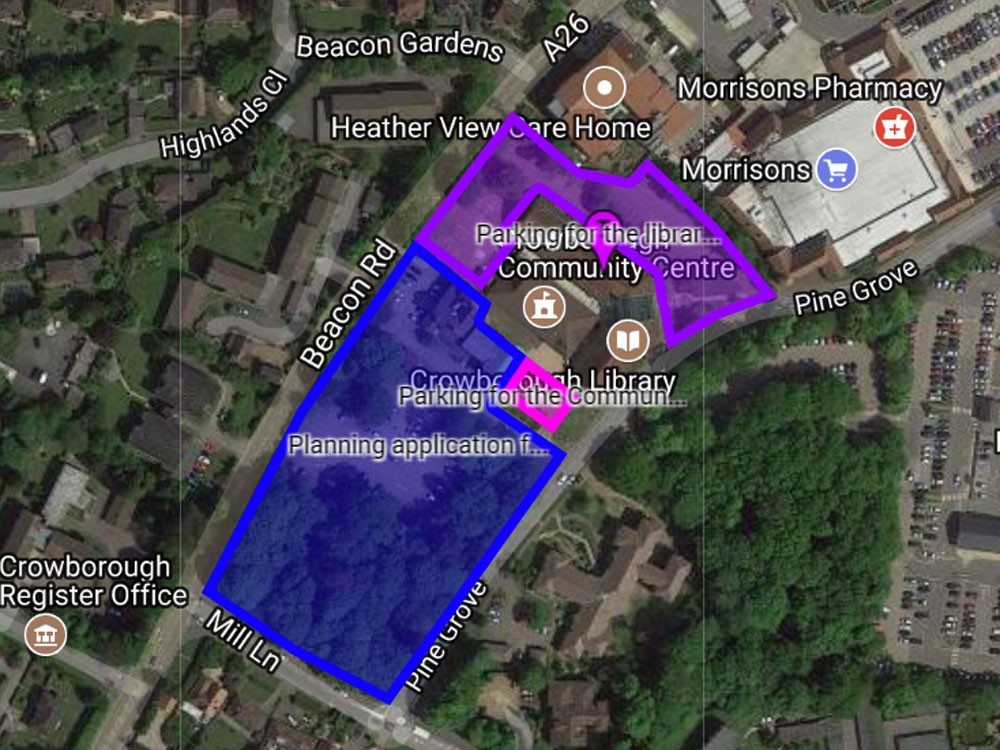 Two members of the committee, representing wards in Crowborough, Cllrs Jeannette Towey (Crowborough West) and Neil Waller (Crowborough North and Deputy Chairman of the Planning Committee), declared a conflict of interest and were required to leave the meeting for the item.  As one of the two local ward members, Cllr Towey would have in any case been prevented from voting.  The other local District Councillor, Cllr Jim Hollins, could have exercised his right to address the committee.

In the absence of a local member, the Chairman agreed Cllr Philip Lunn (Crowborough East) could read a statement on behalf of himself and Cllr Rose. 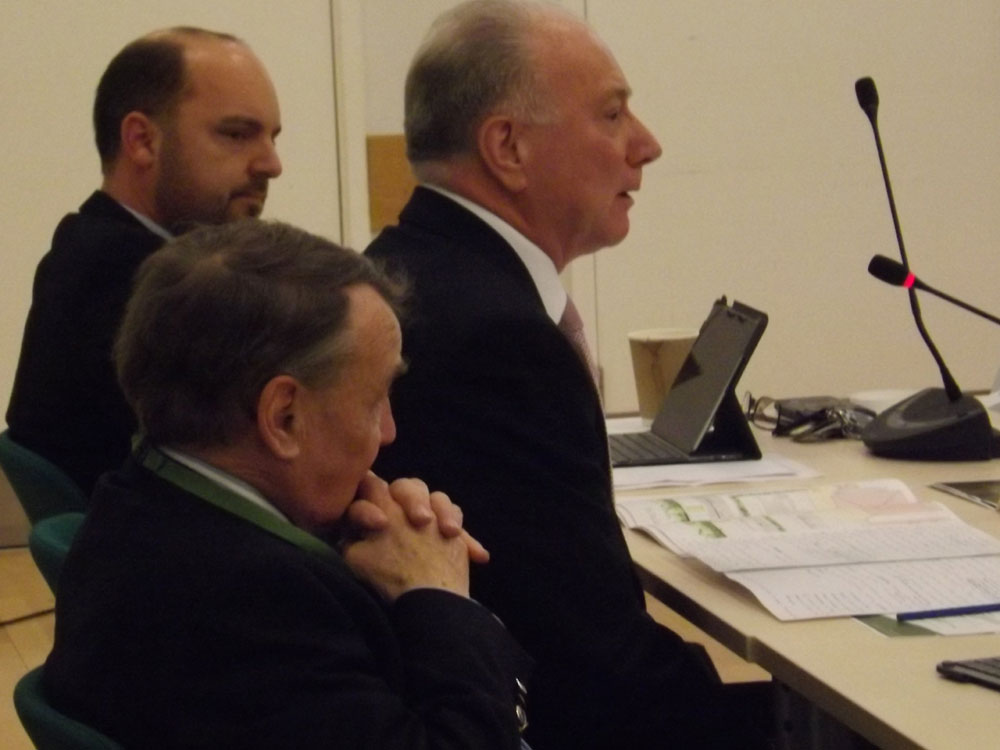 The one remaining Councillor from Crowborough, Steve Isted (Jarvis Brook) had explained to the Chairman of the Committee before the start of the meeting because of an important medical appointment, he would need to leave the meeting to make an appointment at Eastbourne Hospital at midday.  As time draws in the debate, Cllr Isted requested the Chairman bring the matter to a vote.  However because of additional questions from members he was forced to leave the meeting before a vote was called.  After the meeting accusations of filibustering have been made.  That is waffling in an attempt to delay or block a vote by extending the debate.

After the meeting Cllr Isted said he was obviously disappointed with the result:

I was hoping there were enough Councillors to vote this application out on many issues, especially the lack of economic investigations into the affect this development would have on the CCA hall and the new enterprise hub in the old WDC building.
I try to work hard for my ward and Crowborough and I did my best on Thursday, I now know that even if I had been there to vote it would have been 5 votes for and 5 against.

In the circumstances of a tied vote, procedures dictate the Chairman of the Committee has a casting vote.  The Chairman, Cllr Johanna Howell (Frant/Withyham), would have been left in the awkward position of deciding what to do, having already voted to grant permission.

At Wealden’s Planning Committee meeting, councillors were in total denial of the impact this application would have on Crowborough.  Their blinkered approach appeared to make them unable, or unwilling, to understand the consequences of their actions.

Democracy and fairness were not well served at this meeting.

What happened to Cllr Isted was, frankly, disgraceful.  The Crowborough residents watching couldn’t help but link the fact that Wealden and East Sussex councils are the ones selling the land because it was approved despite so much opposition. 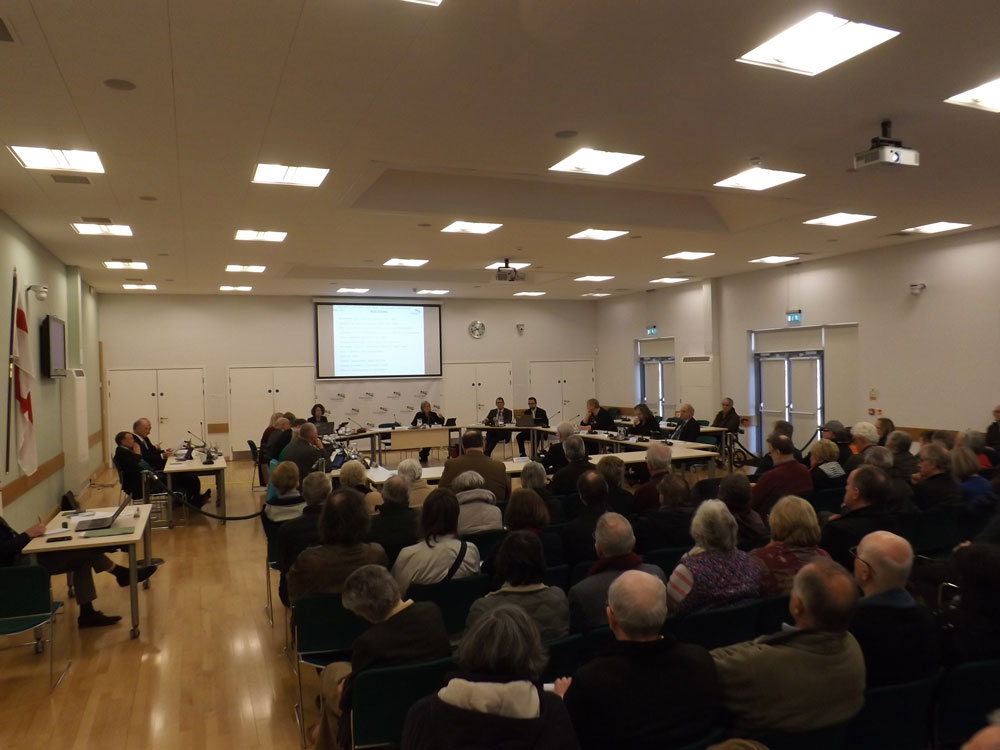 After the planning committee approved the development, objectors hoped the Secretary of State would decide to hold a public inquiry.  However yesterday (Wednesday 11th), just days after the hearing, Wealden District Council received a response.  The letter explains the power is only used very selectively and the Government believes planning decisions should be taken at a local level.

It is understood one of the CCA’s team had written a six-page document arguing that Sajid Javid MP should call-in the application.

The CCA have called an urgent meeting of its Board and Trustees for Monday 16th April to discuss future action.

A spokesperson said a Public Meeting will be called in Crowborough and that professional advice will be sought on legal moves to stop the development or have it substantially amended.  Fund-raising to support legal action will be discussed.

A complaint of maladministration has now been lodged against #Wealden & will go to the LG Ombudsman for investigation https://t.co/drQuYvds9g

A complaint about how a council has handled an issued is normally dealt with a two stage internal process, handled by officers not involved in the compliant.  If the complainant is still not satisfied they can take the matter to the Local Government Ombudsman (click to see Wealden District Council’s complaints procedure).

East Sussex Highways had recommended the application be refused because of hazards caused by an access road off Mill Lane to five of the houses on the site.  However at the last minute the developer agreed to revise the scheme for the second time in order to scrap this entrance, meaning all residents and visitors would enter off Pine Grove.

The Community Centre, is situated immediately to the North of the site.  It is run by the Crowborough Community Centre.  At the meeting three members of the CCA spoke passionately about why the application should be rejected.  After a presentation and update by the North Team Leader, Planning Officer Stacey Robins, Crowborough Town Councillor David Larkin (who is also a Director of the CCA) Clive Wilson, (CCA Director) and Alan Cornish addressed members of the committee for three minutes each.

Architecturally ugly, this simply atrocious application just adds Stalinist LEGO blocks as a welcome to the A26 to Crowborough.  The mantra of much-needed housing doesn’t make this plan appropriate in its location, acceptable in its design or fitting in its scale.  It cannot justify the collateral damage which it will reek upon Crowborough Town Centre for years to come.

On the subject of parking he said:

Out-of-date, inaccurate data is being used as hard evidence.  Nearly 20% of all car parking will be lost in Crowborough Town Centre.   A 40% reduction in long stay car parking.  Ninety-nine spaces available to be lost.

He said the application is “vehemently opposed” and “if passed, it would be an example of cynical corporate mugging”.  He asked Councillors if they would “be proud to answer for the blight this is going to cause to Crowborough in years to come.” 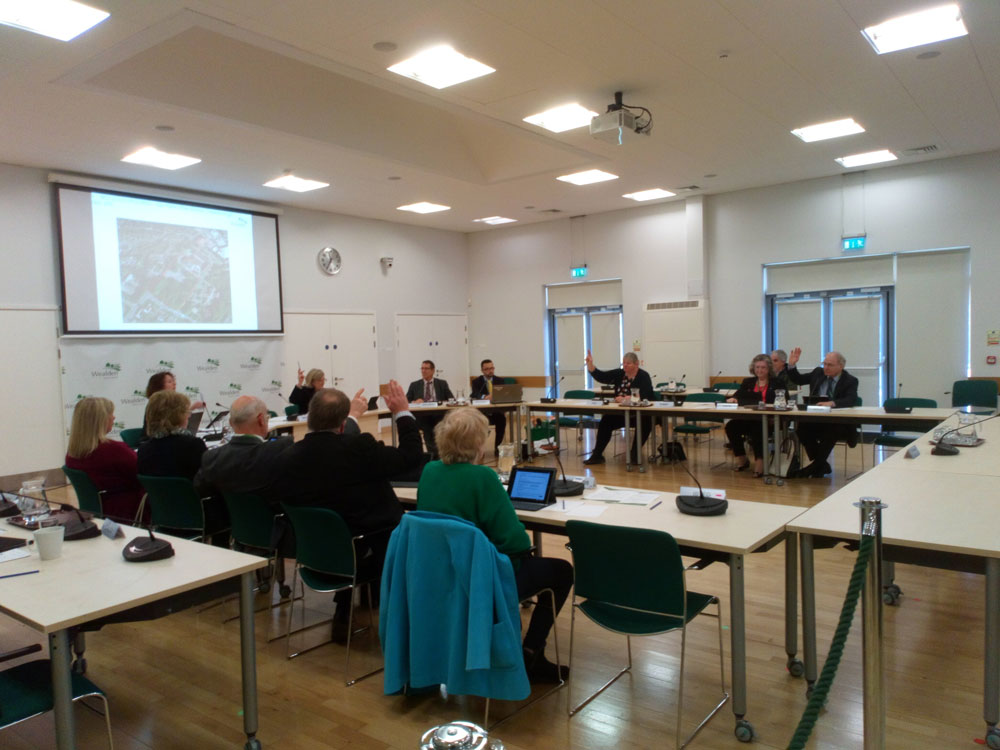 After nearly 1½ hours of presentations and debate a vote was called.  Cllr Dixon (Rotherfield) proposed to accept the Officer’s recommendation with an added condition regarding a better pedestrian crossing to be constructed on Pine Grove. His proposal was seconded by Cllr Michael Lunn (Buxted & Maresfield).  The vote was carried 5 to 4.

Two members of the Committee, that represent wards in Crowborough, both declared a prejudicial interest in the application and left the meeting for the duration of the item.  Cllr Neil Waller (Crowborough North and Deputy Chairman) because he is a Director of Sussex Weald Homes Ltd, a housing development company owned by Wealden District Council.  He said Sussex Weald Homes are “currently entering into a transaction with Wealden District Council and the particulars of that transaction are contingent upon the outcome of planning”.  Cllr Waller is also a Crowborough Town Councillor, and as such a custodian trustee (holder of the property) of the Crowborough Community Asociation.  Cllr Jeannette Towey (Crowborough West) is a Trustee of the Crowborough Community Association.  She declared a pecuniary interest, that there is a reasonable likelihood that the financial value of the Community Centre might be affected by the decision.

You can watch the meeting here: