Update:  A limited cull of Fallow Deer was approved to reduce traffic accidents and improved the health of the herd.

Does of breeding age will be shot by stalkers.  Police and nearby residents will be warned.  It will take place before March 2015.

For more information see the Minutes of the Conservation Committee on 5th January 2015.

The Conservators of the Ashdown Forest have been asked to reconsider their policy on allowing culling of deer on Forest land.

The Deer Initiative, which promotes the management of wild deer population across England and Wales, has written to the Board of Conservators asking them to think about allowing some limited culling during the winter season starting on 1st November. 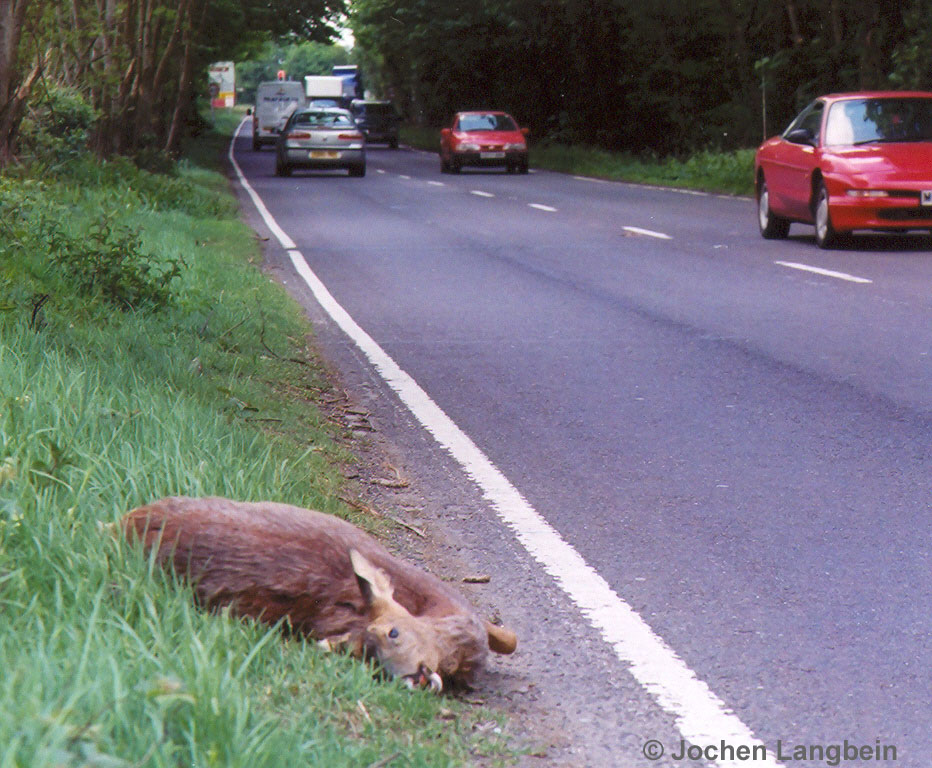 The Deer Initiative Partnership includes over 20 organisations, including the RSPCA, the Country Land and Business Association, the Highways Agency, the National Farmers Union and the Association of Chief Police Officers.

Limited culling has been taking place on private land around the Ashdown Forest to manage the population, but the Conservators have always been reticent to allow a cull on Forest land because of public safety and public perception.

In a letter to the Board of Conservators, Jamie Cordery, South East Deer Liaison Officer for the Deer Initiative said it is becoming more difficult to manage deer numbers commonly because deer are using parts of the Forest as “safe haven”.

The Conservators of the Ashdown Forest have for a long time been supporters of the Ashdown Area Deer Forum and indeed were instrumental in its creation.  The Forums’ main aim was to reduce the extremely number of deer vehicle collisions (DVCs) in the area.

As part of the Forums’ work a deer management group was set up, centred on the private land within the Forest.  The purpose of this group was to prevent further increases in deer numbers, known to be very high, and suspected as one cause of the high numbers of DVCs.  Culling by the deer group has significantly reduced DVCs, improved deer body weights and improved ground flora in the woodlands, but to date Forest lands have not been included.

The number of vehicle collisions with deer peaked at around 340 around 5 years ago.  The Ashdown Forest is considered to be one of the worst hotspots in the country.  Fallow are by far the most common deer species seen on the Forest.  It is difficult to accurately estimate the population, but numbers could be as high as 20,000 across East Sussex as a whole.  Since 2009/10 the number of collisions has dropped because of limited culling and initiatives to raise awareness, including new signs and posters.  But efforts to reduce the number of collisions still further have proved difficult.

If the Conservators agree in principle to take part in the cull this is likely to include small numbers of deer and only in areas where culling is most likely to help reduce DVCs.  There are unlikely to be plans for a generalised cull across the whole Forest, particularly the open heathland.

I would stress that any culling will be carefully considered and carried out in a safe and humane manner, in contrast to the current toll of deer on the roads. 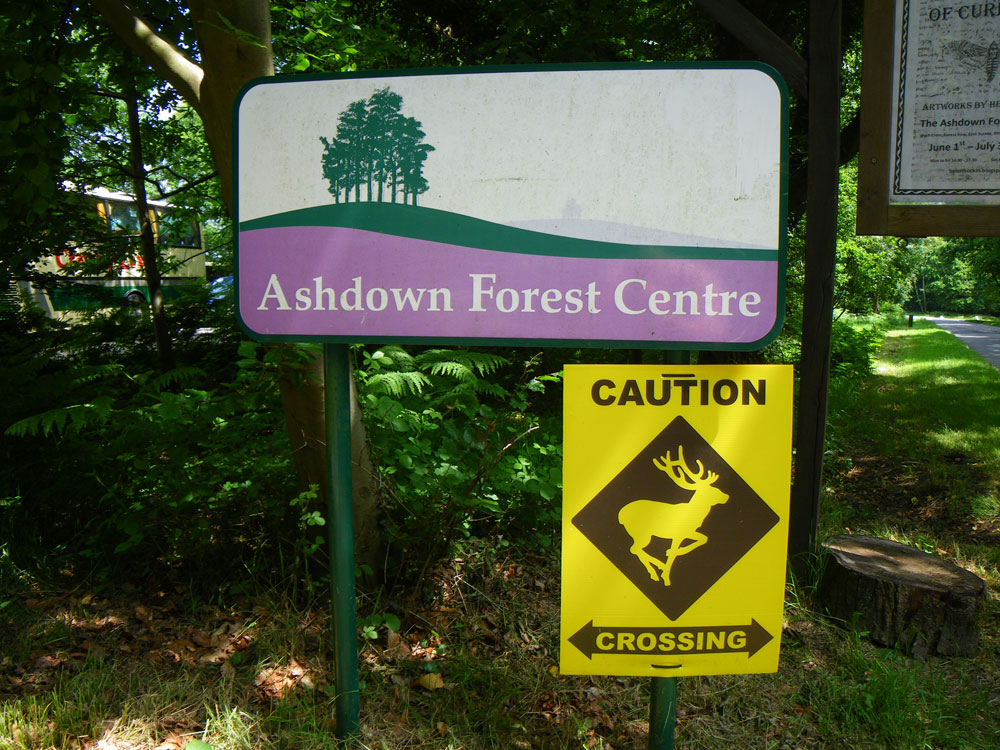 Robin Shilling is a local deer stalker who manages deer levels on private land in East Sussex.  He grew up in the farming community and has been shooting for over half a century.  He agrees the deer population on the Ashdown Forest needs to be controlled because of the detrimental effects to land and road accidents.  He believes the most humane method is a well placed shot from a high powered rifle.  However he thinks a “short trial cull” on the Forest will achieve little, as fallow Deer are very nomadic and will move into surrounding areas once they have seen members of the herd killed:

The best way to manage the deer is to take out as many females as possible and leave the master bucks in place, and reduce the number of males in their second and third season.

If the cull were to go ahead on the Ashdown Forest, the probable outcome would be that deer would move to nearby farmland and causing more problems for the farming community.  They in turn would want them shot because of the damage, thus pushing them back into the forest.  It is a problem for everyone to solve. 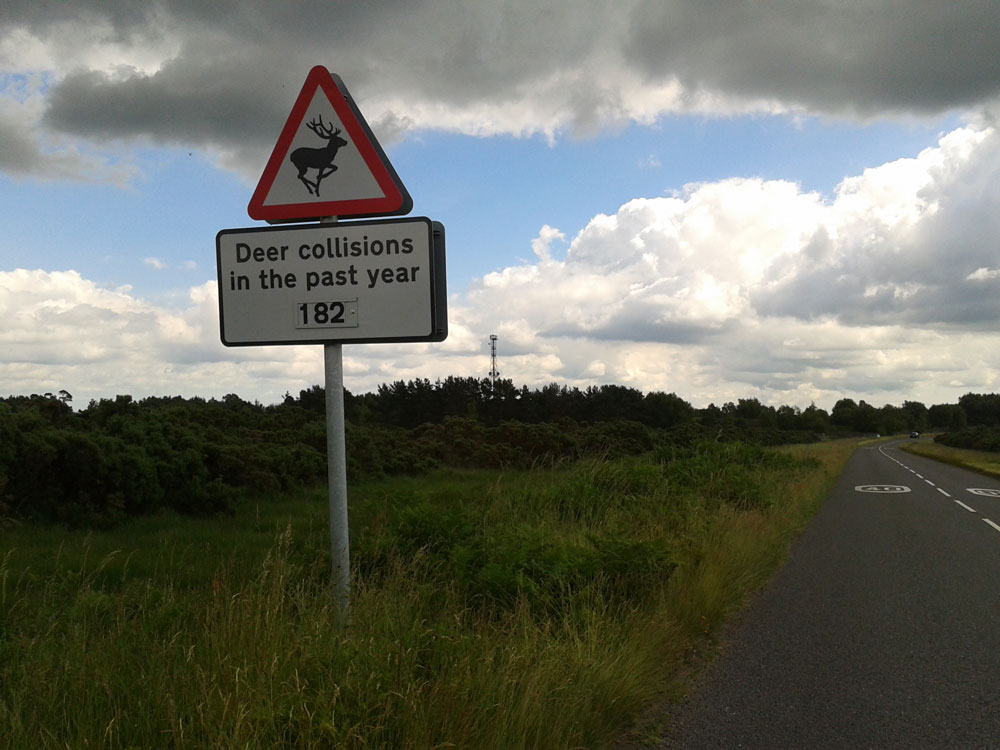 Road sign on the B2026 on the Ashdown Forest

The number of deer collisions is well down on what it used to be.  I believe that there are less deer on the Forest due to the way in which it is managed.  More sheep, cattle and other animals are now used to graze the Forest causing deer to move further out of the forest into the rest of the county as a result, as well as the new deer fencing which also restricts the deer’s access back to the forest.

Wild animals will always be a cause of road casualties, and there are preventative measures which could be introduced to help reduce down road casualties even further, including managing the speed of vehicles better in high risk areas, introduction of under passes on the forest, better management of road side verges, electronic warning signs which pick up on deer activity on the road or verge ahead and more.

After a discussion at the Conservation Committee in June it was agreed that Steve Alton, the Conservation Officer would draw up a programme for a short trial cull on the Forest and that he would work with the Deer Initiative on advertising and public relations before any cull commenced.

The Committee would then evaluate the cull outcomes, public perception and make decisions regarding the future of culling on the Forest

Environment
2 comments on “Deer Cull approved on the Forest”