Battle buses are being arranged to take outraged residents to Hailsham next week when an application to build 68 apartments and houses on land owned by Wealden and East Sussex councils is heard by the District Council’s Planning Committee.

To the disappointment of objectors, the revised scheme does nothing to meet their concerns to preserve public car parking and ensure the future viability of the Community Centre.  The Community Centre only has 16 dedicated car parking spaces.  Chantal Wilson, chairman of Crowborough Community Association said:

I am very disappointed that Wealden and Abbey have taken none of the points we have made into account, even though we have put forward a credible plan which preserves public car parking and provides the essential buffer zone between any development and the Community Centre.

Let Wealden be in no doubt that Community Centre volunteers and the CCA Board of Trustees are going to find it very difficult to continue to make the Centre a success if this plan goes ahead in its current form.  The CCA finds it insulting that the Centre is being undermined by organisations that clearly do not put any value on the enormous amount of voluntary time given to making the Community Centre a success and a vibrant contribution to Crowborough’s community spirit and vitality. 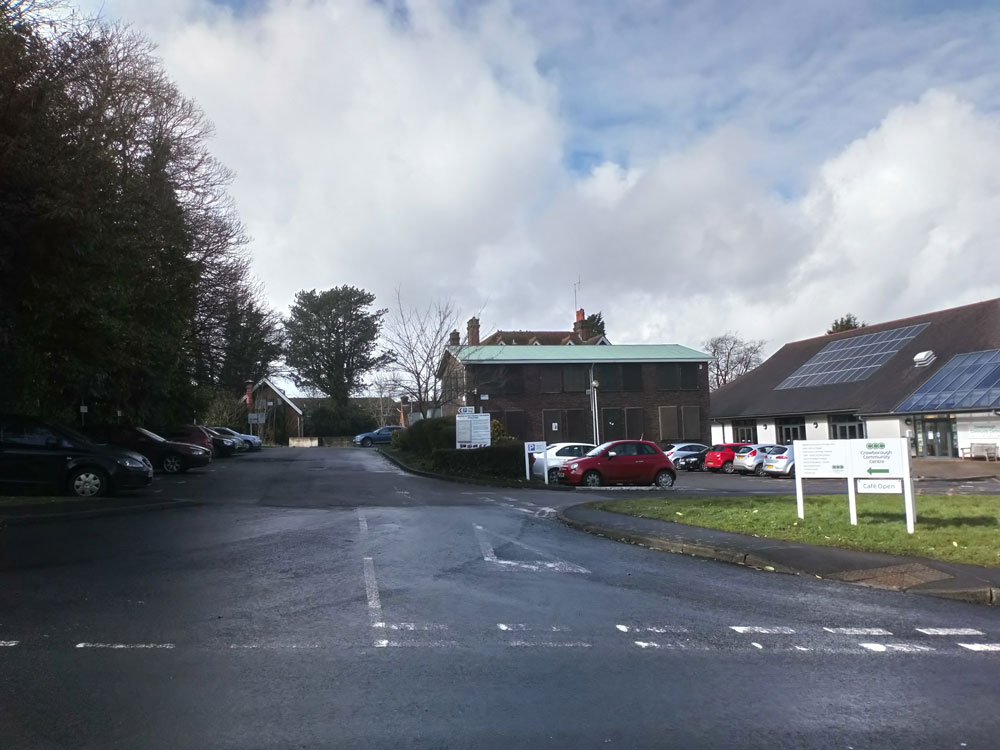 Entrance to the site off Pine Grove

The twelve elected members of Planning Committee North will consider the application when they meet on Thursday 5th April.  Planning officers are recommending Councillors grant permission (subject to no new sustainable objection being received).  The officer’s report states that 247 letters and emails have been received objecting to the development, and additional responses are being received on a daily basis.  On the Ask the Leader page on Wealden District Council’s website, Councillor Bob Standley states that: “Any observations received up to 24 hours of the planning committee will be accepted for consideration.”  He explains he does not take any role in the planning process, but adds:

In my own opinion, I believe there will still be ample parking space in the town centre to support the Community Centre while allowing for the development to take place.  This will provide much-needed new homes for the area.

The transport consultants working on behalf of the developer carried-out parking surveys on three days last March.  Their latest Transport Statement concluded that the loss of parking as a result of the proposed development will not have a detrimental effect on on-street parking.  They argue there is potential to park 25 cars on the A26 Beacon Road.

Crowborough Town Council is a statutory consultee.  Their Planning and Development Committee discussed the revised scheme last Monday.  They have written to the planning authority recommending refusal, as well as noise disturbance and what they consider to be the inferior design of the flats, they commented about the detrimental effects from the loss of parking:

The application sights the Pine Grove car park for alternative parking but this is not a public car park.  It is a private car park owned by Crowborough Town Council that has been allocated to the Business Hub which will be fully occupied once opened later this year.  Consequently it should not be excluded from parking provision considerations.

The Chamber recognises and supports the need for affordable housing in Crowborough but does not feel that this site is the best one for this density of dwellings.  The loss of car parking will be of detriment to the town centre, especially once the Pine Grove Offices are fully operational and demand for parking inevitably increases.

At the time the officer’s report was written, further responses to the revised scheme from the Town Council and Highway Authority were outstanding.  These have now both been received and are available to view on the authority’s planning portal (under “Consultee response” they are dated 26th and 27th March).  Wealden District Council have told CrowboroughLife that the Town Council’s objection about the loss of parking is not accepted by the Highway Authority.  They have said it is not a new point and is not a sustainable basis on which to resist the application.

Click to see the agenda and reports for the meeting of Planning Committee North on Thursday 5th April.  Also under consideration at the same meeting is an application for eight new homes on Blackness Road and a scheme to demolish Harecombe Manor and build a new extra care facility.

Housing
3 comments on “‘Battle buses’ to descend on Wealden planners”