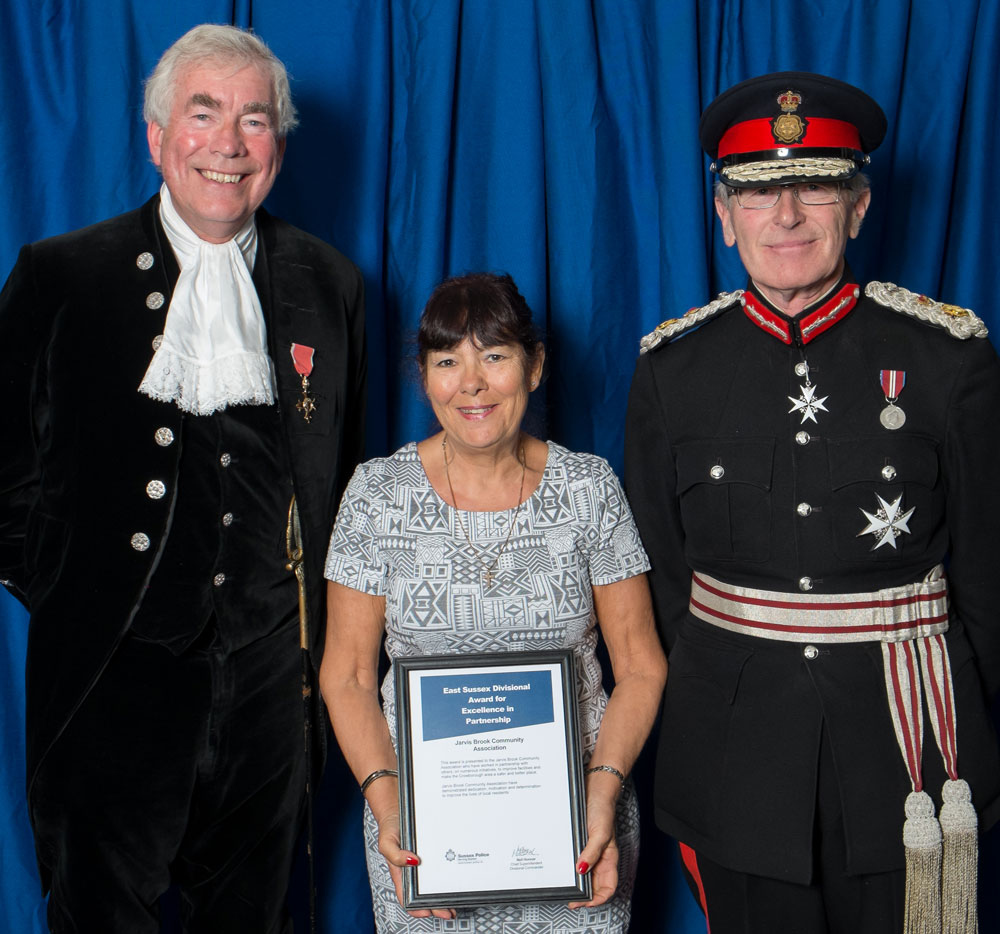 Pictured with Carolyn is the High Sheriff, Christopher Gebbie (left) and the Lord Lieutenant Peter Field

The Jarvis Brook Community Association has received an “Excellence in Partnership” award from Sussex Police, for the work they have done to improve their community.

Chair Carolyn Wickens accepted the certificate from Her Majesty’s Lord Lieutenant and the High Sheriff for East Sussex (pictured) at Sussex Police’s Divisional Awards Ceremony at The East Sussex National Golf Resort and Spa in Uckfield.  The award is in recognition of what JBCA have done with other organisations to improve facilities and make Crowborough a safer and better place.

For me this is the best day of the year. It is so important for us to recognise the outstanding work of colleagues, volunteers and members of the public who go above and beyond what is required of them, reminding us of why we do this job.

I am proud to see so many officers and staff members being awarded but equally as proud to see members of the communities we serve also being recognised.

Sir Robert Peel, the founder of modern British policing, said ‘The police are the public and the public are the police’ and that is still true today.

We, the police, could not do our job without the help and support of our communities.  I’d like to congratulate and thank all of the inspiring award winners.  Please keep up the good work.

The Community Association was set up in 2010 to improve the quality of life in Jarvis Brook, and covers Bracken Close, Brook Close, Burdett Road, Forest Dene, Forest Rise, and Heather Walk.  The Association works with other organisations, including local Councils, Crowborough Police, youth services, St Michael’s Church and Wealden 3VA, which supports voluntary action.  In 2012 a Neighbourhood  Agreement was signed.

One of the major success stories has been the revilalisation of the recreation area at Jarvis Brook.  Owned by Wealden District Council, and leased from them by Crowborough Town Council, the recreation ground was suffering from a lack of care and attention.  In 2012 modern play equipment was installed and a new skate park built for older children and young adults to use.  In a community survey, one of the priorities identified by the local community was the redevelopment of JBs, the disused youth centre into Community Hub.

It was a great honour to receive the award on behalf of the Jarvis Brook Community Association in recognition for the work we do in the community.

Carolyn encourages other members of the community to get involved.  JBCA hold monthly meetings at the Guide Hut.  The next meeting is on Wednesday 12th November starting at 7.30pm.   You can find-out about the work of JBCA on their Facebook page.

If anyone would like to come along and join us we are a very friendly group.

Also receiving an award was Sophie Hepworth of Wealden District Council’s Community and Regeneration team in recognition of their partnership work including Safety in Action, Play Days, Fun & Safety and Electric Blanket Testing.
One of the Police Officers getting an award for devotion to duty was PC Paul Bridger.  PC Bridger’s award was for apprehending a violent rape suspect in Lewes last year.  Whilst chasing the man PC Bridger fell and broke his elbow, undeterred, he continued to chase the rapist.