A painter and decorator from Crowborough is splashing out on a holiday to the south of France after winning more than £5,000 in the Air Ambulance’s lottery.

Andy Cheek, 38, signed up for the lifesaving charity’s Superdraw through a canvasser at Morrisons last year. 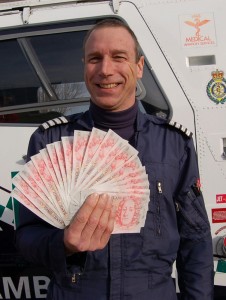 He thought nothing more of his £8-a-month subscription until he received a call telling him he had won the top prize with lucky numbers 7, 15, 18 and 20 in Wednesday’s draw.

The married father-of-two won a grand total of £5,265 and is now planning a week-long trip to Nice with his family.

We were planning to go anyway but at least now we can have a bit more of a nicer time. We’re stopping in the Champagne region on the way back so we’ll stock up with some bubbly to celebrate.

I think the most I’ve won before is about £100 on the National Lottery. I was at work when the cheque arrived and I couldn’t believe it so my wife took a picture of it and sent it to me.

I ride motorbikes and my wife rides horses and you never know when you may need the air ambulance but hopefully not.

Kent, Surrey & Sussex Air Ambulance’s Regular Lottery costs just £1 per week and there are 12 winners drawn each week with prizes ranging from £25 to £1,000.