Kent, Surrey & Sussex Air Ambulance Trust has welcomed the Chancellor’s waiving of VAT on fuel for air ambulances in the Budget. 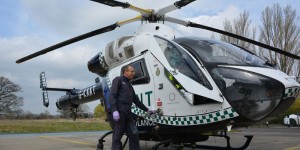 However their Chief Executive Adrian Bell is concerned the Trust may not get a rebate on the full VAT bill:

The charity currently spends about £180,000 on aviation fuel per year, of which five per cent is VAT, therefore our total VAT bill is about £8,000 a year.

I welcome the Chancellor’s announcement on VAT but note that it is a five-year grant of £65,000 per year for all Air Ambulance charities throughout the UK.  I am therefore unclear as to whether we will get back our full VAT fuel bill each year.

More than 100,000 people signed a petition calling for Air Ambulances in the UK to be exempt from paying VAT on their aviation fuel.

On average each of Trust’s two helicopters burn 500 litres to fly to an emergency and airlift an injured patient to a trauma centre.

But it was another announcement made by George Osbounre which the boss of the charity found most interesting.  In the Budget, the Chancellor also promised £1million from LIBOR fines collected from UK banks will pay for a second air ambulance for London.

Kent, Surrey & Sussex Air Ambulance recently launched their night flying operation, which they estimate will benefit a further 400 to 500 patients a year.

Following a change in Civil Aviation Authority regulations in 2012, the charity replaced one of its older helicopters with a night-capable MD902, which now operates from Redhill Aerodrome 24-hours a day.

The charity now anticipates it will need to raise an extra £1million a year to meet the additional operational costs, up from £5million to £6million.

“I am more interested in his decision to provide a new helicopter for London Air Ambulance out of the LIBOR fines fund because if this opens up access for us to that fund then I welcome it because we have some substantial capital expenditure projects as a result of our investment in night flying.

If it doesn’t open up access to this fund for us then I find the Chancellor’s announcement perverse.”

The Air Ambulance service in Kent, Surrey and Sussex relies almost entirely upon the generosity of the public to support the two helicopters based at Marden and Redhill.

People wanting to make a donation should call 01622 833833 or visit: www.kssairambulance.org.uk.