In 1990 Crowborough and Horwich in Lancashire made history by becoming the first English towns to twin. 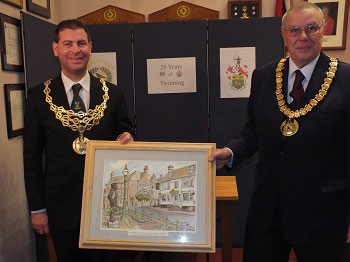 During a visit to Horwich in January Cllr Reed said:

There are a lot of similarities between our towns and the potential for what we can do together is enormous.

He was presented with a painting of Horwich which was hung in Crowborough Town Hall.

Both Mayors are keen to establish a stonger link between the towns and there are plans to commemorate the anniversary by having inter town sports matches this year.

Crowborough Town Council have also proposed that a development comprising 16 houses off School Lane will be called ‘Horwich Close’ and Cllr. Silvester visited the site.  Horwich already has its own ‘Crowborough Close’. 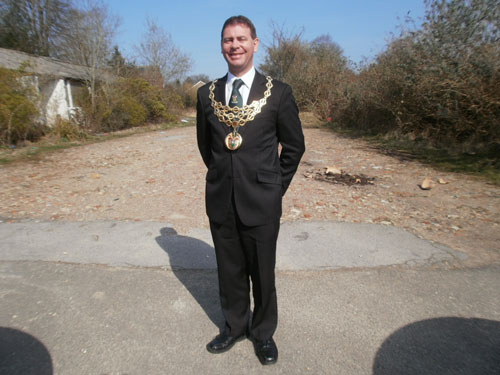 I am very proud that Horwich is twinned with Crowborough.  It is a unique agreement as we are the only two towns within the United Kingdom twined with each other.  I was very proud to promote Horwich when I visited recently and I would encourage residents of Horwich and Crowborough to visit each town if they can.  I think Crowborough is a very interesting town and the people so welcoming.  I hope that the relationship that we have with Crowborough can now last another 25 years and it is great that we are celebrating this 25th Anniversary.

If you are interested in organising a sporting event to mark the 25th anniversary please contact the Town Council.